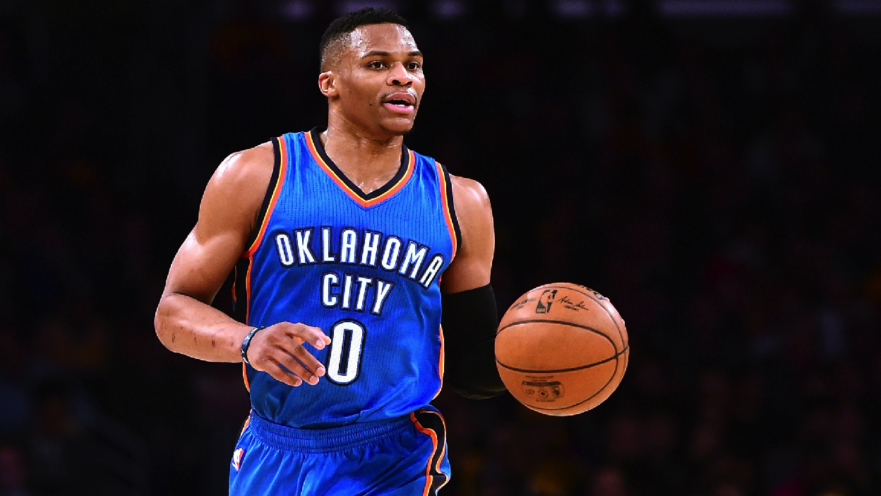 As more leagues adopt F.I.B.A. rules & shot clocks, playing at full-speed becomes a indispensable skill on the court. Teams that can attack the basket before the defense has set up & play downhill will generate high percentage scoring chances.

Squads of five players go up & down the court six times (three trips there & back). One of the posts grabs the ball as it goes through the net & takes it out of bounds on the baseline. The other post runs to the rim. Two wings run wide & deep. The point guard makes a C-cut along the foul line extended & catches the outlet pass with their back to the sideline. The inbounder fills the trail position. 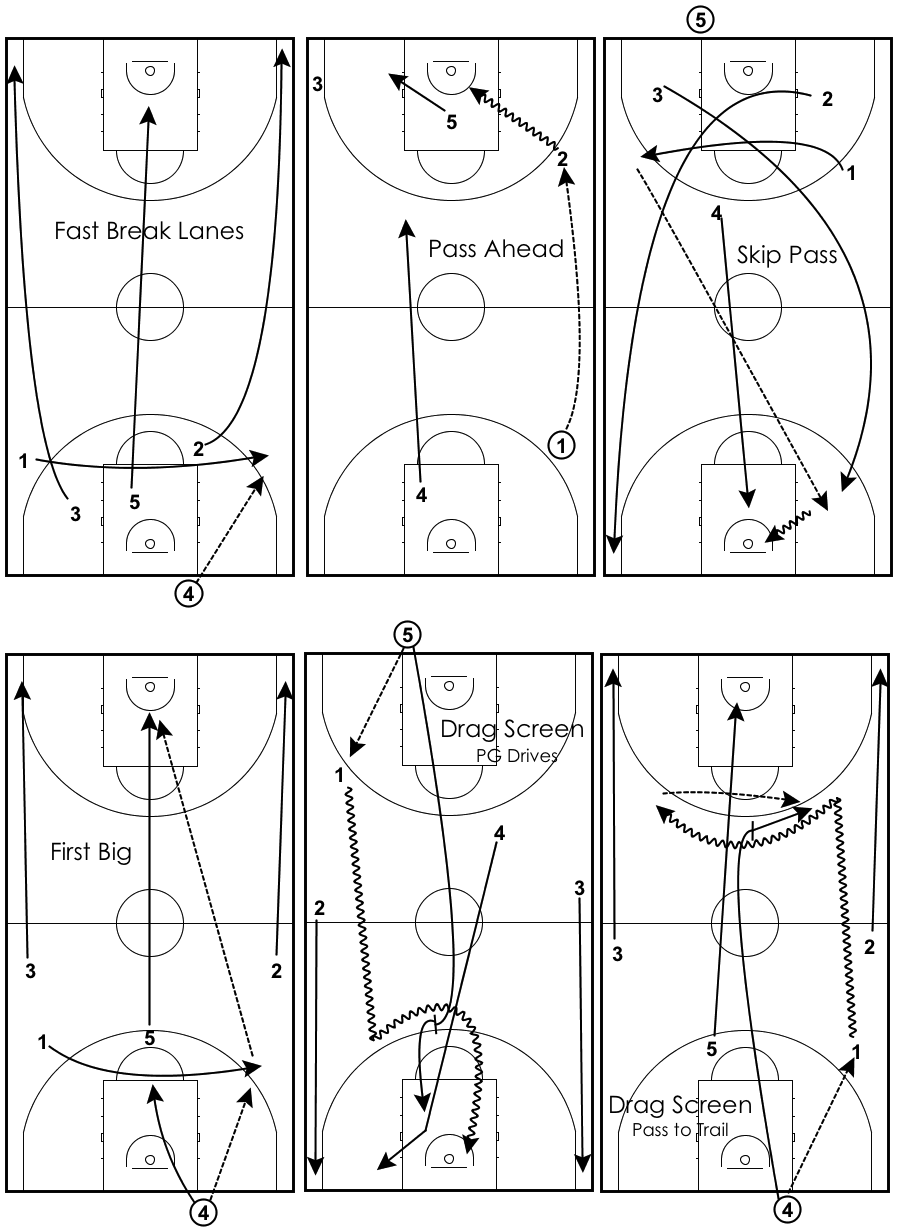 For the first five possessions, everyone gets a shot:

It doesn’t matter what order the shots are taken. To give the posts more touches, they should finish any missed shots. For the sixth position, run the early offense or a play called by the coach or the point guard.

Progression: The coach can throw the ball off the rim & encourages whoever rebounds the ball to push it. Players can circle around the coach before the drills so they must adjust to different lanes & spacing. For the last possession, the next squad can enter the drill & play guided defense to provide a read.

Three players line up under the basket. The first player throws the ball off the backboard & sprints back to midcourt. The second player tips the ball to keep it alive & runs to an outlet position. The third player rebounds the ball & outlets it for a 1-on-1. After the 1-on-1, the defender rebounds the ball & outlets to the third player (the player who rebounded the ball at the other end & threw the outlet pass). Those two attack the player who was just on offense 2-on-1. 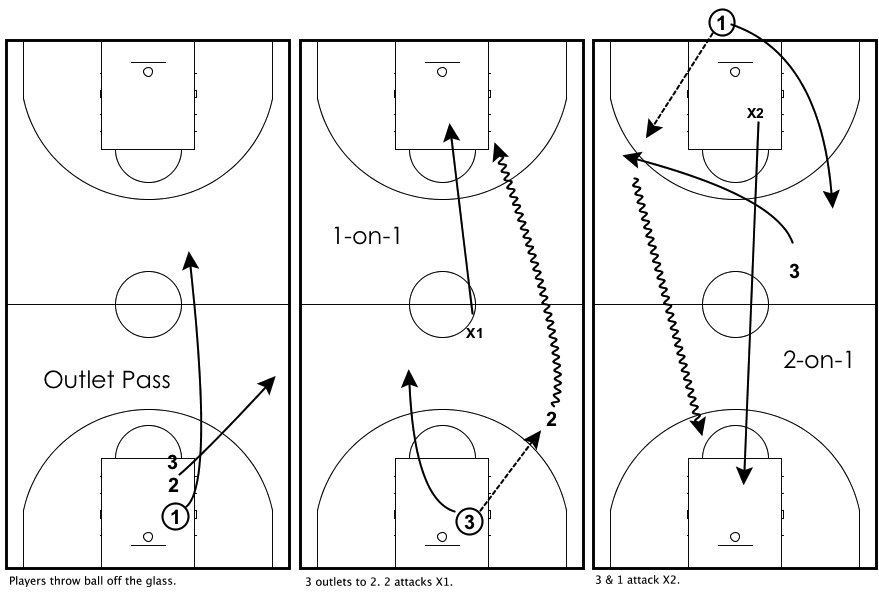 Progression: Add more players to create different situations, such as 2-on-1s & 3-on-2s. Coaches can steal bad outlet passes & keep track of turnovers. For a game situation drill, have the defenders safely give the “pro foul” to stop the fast break at the other end.

Time: 6-8 minutes. The players could be divided into squads & the manager could keep score during the drill. Work:Pause Ratio: 1:2

Two teams line up opposite each other. The team that is lined up along the foul line will play defense first; the team on the baseline will be the first team on offense. The coach has the ball at the top of the key or on the wing. The coach will pass the ball to one of the offensive players, who will push the ball in transition. The corresponding defensive player must run & touch th 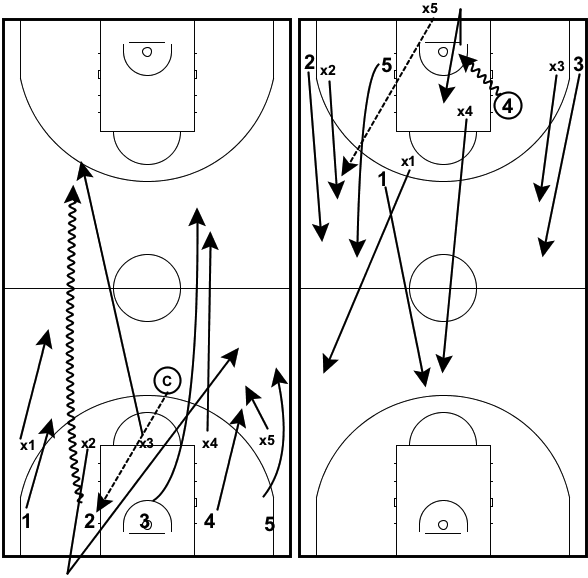 e baseline before getting back on defense. Since the offense has an advantage, the defense must stop the ball before a high percentage scoring chance is created.

At the other end whoever scores, shoots or turns the ball over must touch the baseline, giving the opposite team a 5-on-4 advantage. After two possessions, the drill pauses for new players to sub in or a quick debrief.

Progression: The coach can call the names of one, two or three defenders, who have to run & touch the baseline before they can join the play. For a continuous game, place a scoreboard at midcourt: whoever scores must run to the table & update the score. For a miss or a turnover, they must run to the baseline & back.

Time: 5-10 minutes or play to a set number of points. Provide both teams with an equal number of possessions & ensure that everyone has an opportunity to play all of the transition defense roles. Work:Pause Ratio: 1:2

A competitive & enjoyable drill that can often serve to raise the intensity level in practice if it is lacking. The drill forces the athletes to play & make decisions so there are many repetitions & learning opportunities.

Two teams form lines at midcourt on opposite sidelines. Three players on one team begin on offense & attack two defenders. When they cross half, a third defender runs to the midcourt circle & joins the play. Meanwhile, two defenders from the offensive team get read to play defense.

After the possession, the three offensive player are off & go to the end of the line; the defensive players attack the new defenders 3-on-2 & a trailer joins the play when the ball crosses midcourt. The drill is continuous. 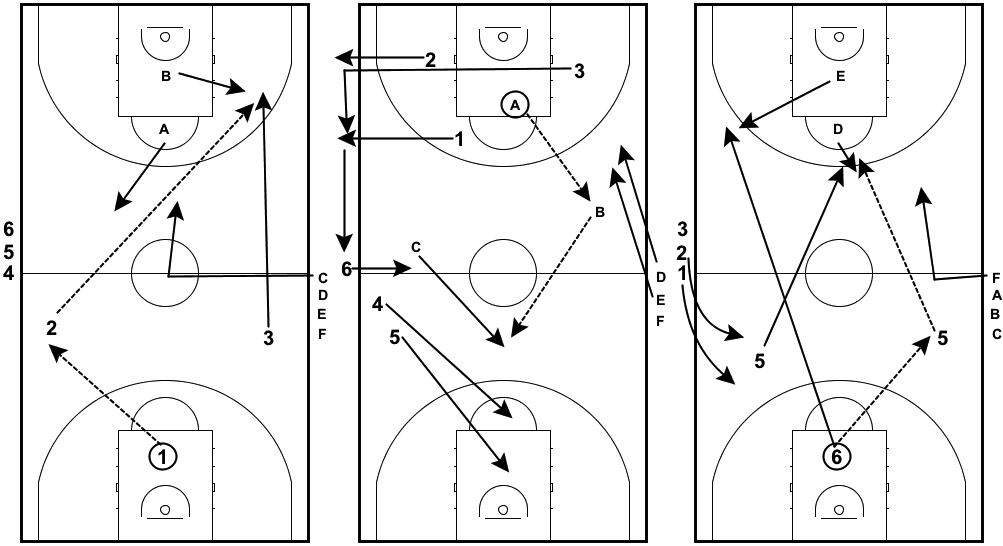 Progression: The coach can call quick two & three player actions (“Drag”, “Fist”, “Pistol”, etc.) or instruct the athletes how to initiate these plays & force them to make the calls. Use a twelve second shot clock to force the action. Encourage guards & forwards to play all spots on the floor.