Here are some drills that can teach a progression of defensive skills, expanding beyond the ubiquitous Shell Drill.

1-on-4 Defensive Skills (Defense Phase A)

At one basket, players take turns playing defense. The defender starts with the ball & initiates the drill by passing to an offensive player on the wing. The defender closes out & shifts positions as the ball is swung, finishing by taking a charge as the last player drives. The defense works on the following skills in sequence: 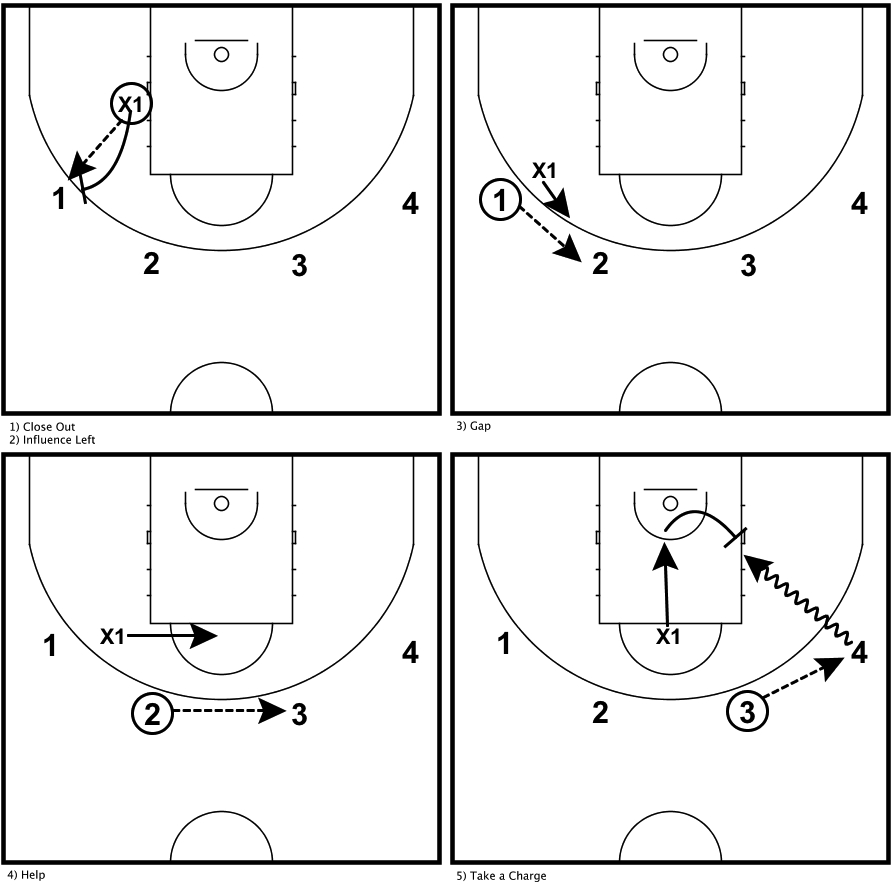 Safety Note: Teach players how to fall (protecting self, falling on butt, pushing out with hands, getting up) before introducing contact.

Progression: Coaches can introduce different skills depending on their philosophy (such as a hard deny of the wing entry pass or tipping a pass). Spread the drill out & coach the players to hit the floor to recover a loose ball or save it from going out of bounds.

3-on-4 Inbound Defense (Defense Phase B)

Divide the team into two squads. Four players are on defense & three play offense. At first, the additional player is someone preventing the offense from going long so the other three players are improving their positioning with a slight advantage. The fourth defender can be removed as the defense improves.

This is a full-court that can develop some basic defensive systems as selected by the coach. The ball starts under the basket with an inbounds pass. Common situations to practice include:

When the offense passes the ball, the defense must sprint to recover. Force the offense to reverse the ball & use time or throw a bad pass that can be stolen. 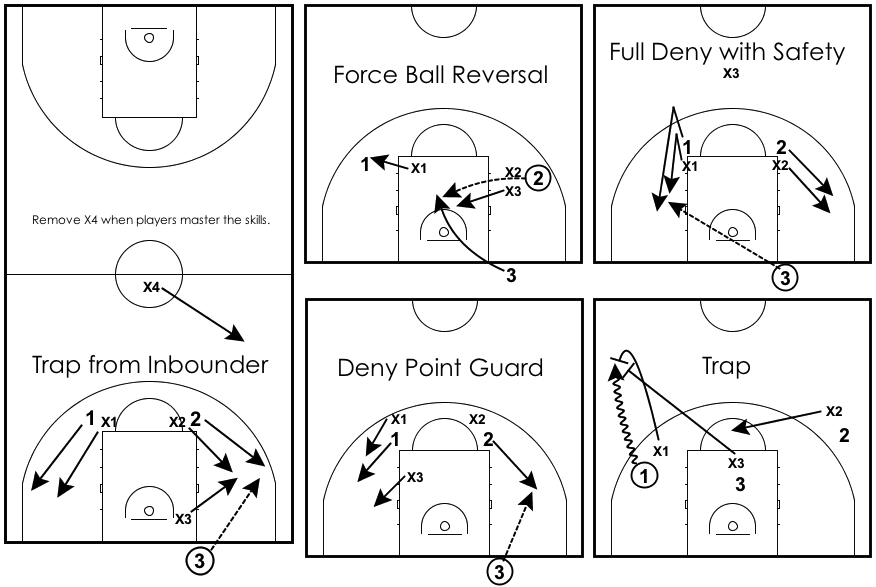 Time: 8-10 minutes. Alternate which team plays defense & provide both team’s an equal number of opportunities. Award one point for a turnover & another for converting a steal into a score. Work:Pause Ratio: 1:1

Five offensive players space the floor against defenders. The defense must put intense pressure on the ball & force the ballhandler to pivot away. One defender protects the basket & the other two gap the ball to protect against the drive. The offense begins by passing the ball (including skip passes) so that the defense works on their positioning. When the coach gives the signal, the play is live & the defense tries to steal the ball before the offense can use their numbers to score. 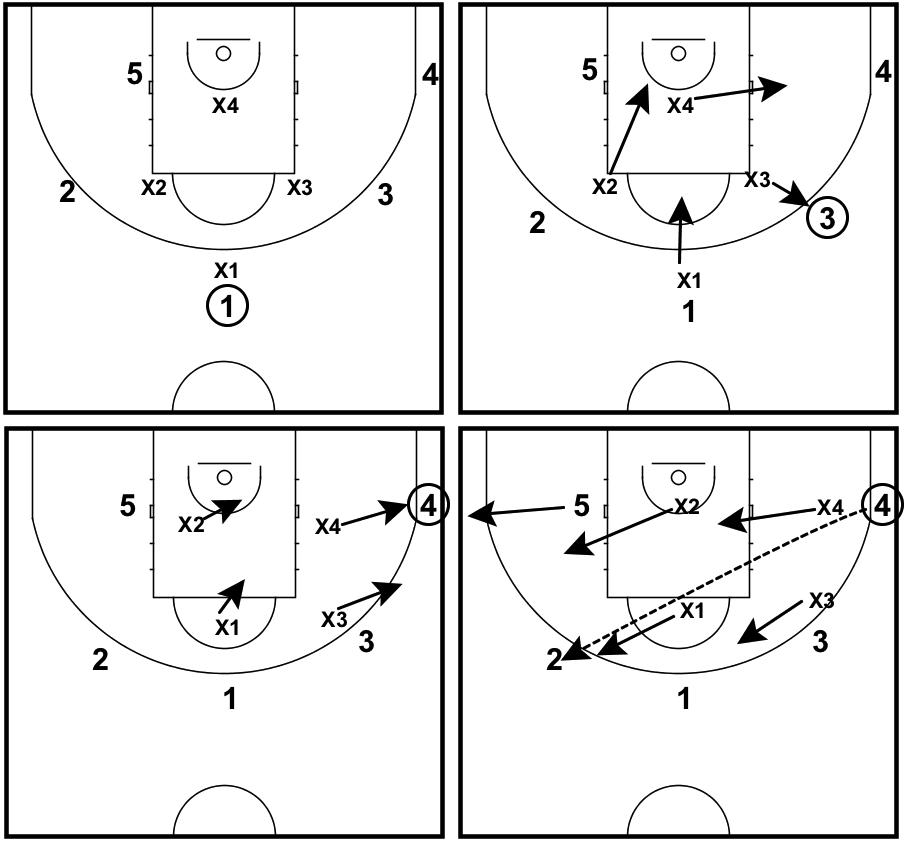 Progression: Play two mini-games lasting 3-4 minutes using twenty-four second shot clocks. One team plays defense for the entire mini-game & counts the number of steals that they generated. Score one point for forcing a bad shot as the shot clock winds down & two points for a turnover. The teams switch roles for the second game. Afterwards, the team with the most points scored on defense wins.

Four defensive players line up on the baseline & four offensive players spread the floor. The ball starts in one corner & the defenders pass it down the line. As soon as a defender passes the ball, they sprint to the opposite man to close out. The last defender passes it to the offense who begins to swing the ball along the perimeter. Once the ball reaches the last player, the ball is live.

Basketball is often frantic & this is a small change from the Shell Drill since it begins with the defense out of position. The defenders should remain under control so they can execute the team’s defensive principles after closing out. 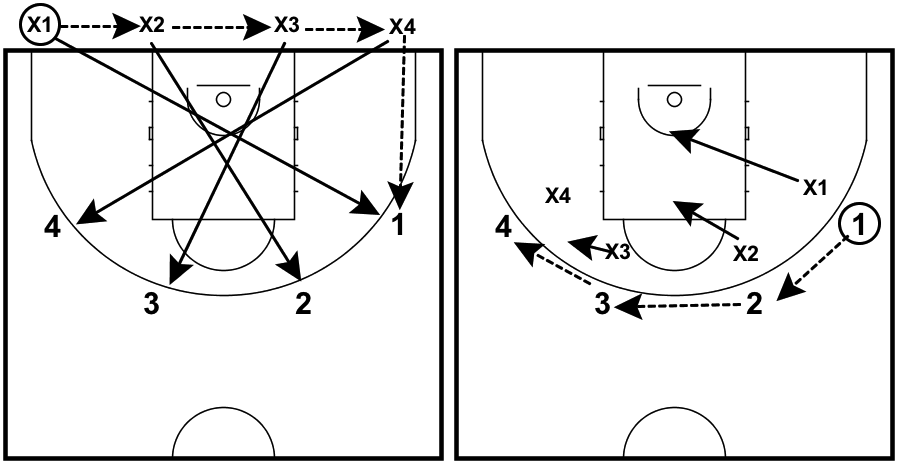 Progression: Allow skip passes or introduce an additional offensive player so the defense scrambles. Penalize paint touches so the defense must work harder. Use a shot clock to increase the time on defense.

Time: 5-10 minutes. Play a mini-game & force the defense to get three stops before moving to offensive. Work:Pause Ratio: 1:1