High school teams succeed and fail based on how burn is distributed. There must always be accountability for what occurs in the classroom and during workouts and practice sessions. The team improves based on the Intensity and Quality of training and playing time is an important incentive. Coaches can give out rewards to players in three ways: positive feedback, minutes, and touches.

Adolescents believe have a very high opinion of themselves and games become an opportunity to perform in front of their peers.  A perceived slight in front of their social group can poison a player’s relationship with their coach for weeks.  While it is important to reward those who are working hard and contributing to the team’s performance, playing time must match a player’s expectations.

If there is a discrepancy between a expected minutes and the actual time,  , the coach should address the issue ahead of time and inform the player how they can increase their court time. This will be an emotional discussion at first; rational thinking will follow once the emotions like fear, anger and pride have been addressed.

Effective substitution improves mental training (self-efficacy, cognitive anxiety, and experience) and performance among both individual players and the entire team. Coaches must find players who can play well and combinations that play well together to maximize team success.

Remain true to your values: I believe in self-actualization, choices and consequences, and open communication so my substitution strategies will reflect those values. I wish to encourage players by providing guidance and goals to achieve. Players always have choices about how hard to work – especially during the off-season – but they will have to live the consequences during games. Lastly, I will do my best to communicate my decisions to players. If there is discontent, I will provide the player with a plan to increase their role, including specific targets for improvement.

Give the players some say: Listen to what the players want but do not let this be the determining factor. Players may say that they want to win or that the entire team should play and this can guide your decision-process. When there is an opening because of injury, players can offer their suggestions for who should receive a chance; they offer a different opinion and may observe facts that the coach cannot see.

If two groups of people have entirely different philosophies, conflict is inevitable. A coach who knows what the players desire can explain decisions and engender buy-in. However, the professional judgment of a coach always supersedes the wishes of the players.

Keep your perspective: The priorities of high school and youth athletics are enjoyment, fitness, and skill development. It is not appropriate (nor wise) to play only five or six players for the entire game in search of a victory. Know the level at which you are coaching and act accordingly.

Enable the entire team: When more players see action during the games, the team has more energy. The bench is involved because they expect to see action and players work harder in practices because they are seeing the dividends. Devise roles for players that best suit their physical and mental abilities.

Increase the number of key contributors: As the season progresses, a coach can reduce the number of minutes given to the bench or eliminate players as required. It is almost impossible for players who have never made contributions to step up at a moment’s notice.

If a player – possibly one who started in a previous year – does not want to accept a reduced role, they should be cut rather than sit on the bench embittered. Sometimes, a marginal player who was fortunate enough to start due to circumstances such as injuries or graduation one year may not be effective to fill a role on the second unit.

Improve productivity: A reliable second unit permits a coach to press and fast-break if desired. If a coach wishes to slow the game down, they can use the substitutions to break up the momentum of the game.

Use the quarter breaks and regular timeouts to increase rest for key players. For example, a point guard who sits the first two minutes of the second quarter probably gets five minutes of rest without missing too much game time.

Use a hammer when required: A coach should demand that all players play as hard as possible for the minutes that they are on the court. If there are no viable alternatives, players intuitively know that they are safe. A competent second unit allows a coach to use techniques like briefly pulling all five players in order to send a message.

Think outside the box: One season, the U.T.S. Senior Boys Team lost both the starting and back-up point guards during the middle of the season. We adjusted by promoting the manager to the starting point guard and playing him for four minutes at the beginning of the first three quarters in a very controlled situation. At other times, we would play without a true point and emphasize athleticism and passing.

Keep the same rotation: Like an N.B.A. coach who strictly controls the minutes of all players, high school and college coaches should keep a regular schedule. Players know when they will enter the game and who they will play with.

In order to balance flexibility based on how the game plays out with a routine, a coach must use their professional judgment. Significant changes to the rotation should be made gradually over the course of the season.

Communication: Everyone understands their role. Each player has a reasonable set of expectations to meet and need not feel like they must do it all. When a coach alters a player’s role, this should always be communicated privately in advance to the athlete in question.

Never penalize mistakes: A coach should not remove a player from the game for a single mistake. This could increase mental anxiety, especially among players with less confidence. The coach should address the mistake and give the player a chance to make amends.

Do not disrupt good chemistry: If an opening in the starting lineup materializes because of injury or another circumstance, promote someone who plays little or no minutes. Do not start the Sixth Man or the top guard or post substitute. A coach can increase the minutes given to those players down the stretch but should not sacrifice the initial impact those players bring to the game.

This is an opportunity for an unsung player to make a big contribution and develop, like how Sonny Weems stepped up into the rotation for the Toronto Raptors when DeMar DeRozan suffered an ankle sprain.

Plan the rotation ahead of time: If coaches plan a rotation schedule ahead of time, they can ensure that the lineup is balanced. Teams must have ballhandling, the ability to get the ball inside, and rebounding on the court at all times. Coaches can compromise a less significant skill such as shooting or post play. 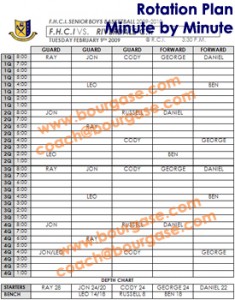 Some aspects of this planned rotation needed to be altered because one of the back-up guards played really well, we altered our defensive assignments in the second half, and one player was replaced by one who was quicker.

Specific lineups will have unique characters such as a halfcourt passing focus, pressure defence that leads to transition offence, or shooting.

Writing an outline of each game’s Player Rotation in advance permits a coach to think calmly and clearly. Do not carve anything into stone so that there is room for adjustments to suit the flow of the game.

Planning facilitates the correct use of timeouts. If it is necessary to use a short bench, a coach should use timeouts regularly over the course of the game in order to keep players rested (rather than for strategy). Waiting until the fourth quarter is too late.

Prepare during practices: A coach should mix up lineups in practice so that different combination of players work together. Team building activities can increase trust and communication among potential lineups.

Evaluate good combinations: Coaches should use stats to track which players work well together and maximize the usage of those combinations. “Hidden Stats” during games can highlight which players create excellent possessions and win the quality shot battle.

Tracking the winning percentage in all practice activities also sheds light on which players possess intangible qualities that can help the team.

Adjust to the game: The five that start the game are not necessarily the five who will finish the game. Likewise, the offensive and defensive systems executed at the beginning of the game may not be the same that are implemented at the end. The systems should suit the players who are on the court. The player rotation for the first half may feature a one guard front but a two guard front could be employed in the second half.

Monitor body language: A good coach should proactively prevent poor performance. If a player is obviously not mentally prepared, for example showing a lacksidaisical attitude or poor body language during warm-ups, a coach should speak with them to see what’s going on. If the negative non-verbal communication continues on the bench or when they first enter the game, the coach should consider curtailing that player’s minutes or not playing them during that game.

All competitive players want to play as much as possible. Some want to win more than others and some want individual success. Handling all of these personalities is one of the greatest challenges facing a coach. Some may be unsatisfied with their roles but by maintaining clear and open relationships, a coach can communicate what players need to do to improve so they can better contribute.