These drills help dribblers handle the ball against a physical defender. The drills were also posted on Canada Basketball’s GamePlan site.

The ballhandler self-passes the ball outside the arc and catches the ball in a balanced stance, squaring up & looking at the rim. A coach stands in the key with a blocking pas. The player pounds the ball twice to start the drill. The dribbler executes a ball move and drives their inside shoulder into the pad. Stay balanced & explode through the contact.

Time: Work both sides of the court for thirty to sixty seconds with each move per side. Work-Pause Ratio: 1:1.

After mastering the dribbling technique, load the drill by finishing at the rim. The drill can also be loaded by adding a counter move, depending on how the guided defense plays.

A player dribbles the ball outside the arc, working on different ball moves. Inside the arc, a coach holds a dodge ball & tosses to the player. The player passes it back & continues to dribble. The coach calls out different ball moves & which hand to use. After a few tosses, the coach catches the ball & shades the player to one side. The dribbler attacks, staying low & draws contact with the inside shoulder.

The soft dodgeball can be used to handcheck the player as they use their body to hold off the defense. The dribbler holds the ball away from their body & finishes at the rim.

Load the drill by making the player move around the half-court to catch the ball. Call out basic math problems (“2×5!”, “6+10!”) to encourage the player to think and communicated. To make the drill competitive, players can keep score & challenge each other.

A ballhandler begins on the baseline. A defender starts with the ball facing the offensive player. The defender will give as much space as they feel is necessary to keep the dribbler in front of them. This will vary by player but the idea is that the athlete will analyze their matchup and make adjustments.

To start the drill, the defender passes the ball to the offensive player who attacks the basket. The ballhandler is trying to beat their defender & create an advantage. Once they beat the defender, they will cut off the opponent so that they cannot recover. Carve out the defense using the hip & shoulder. Finish with the hand that is furthest away from the defender. 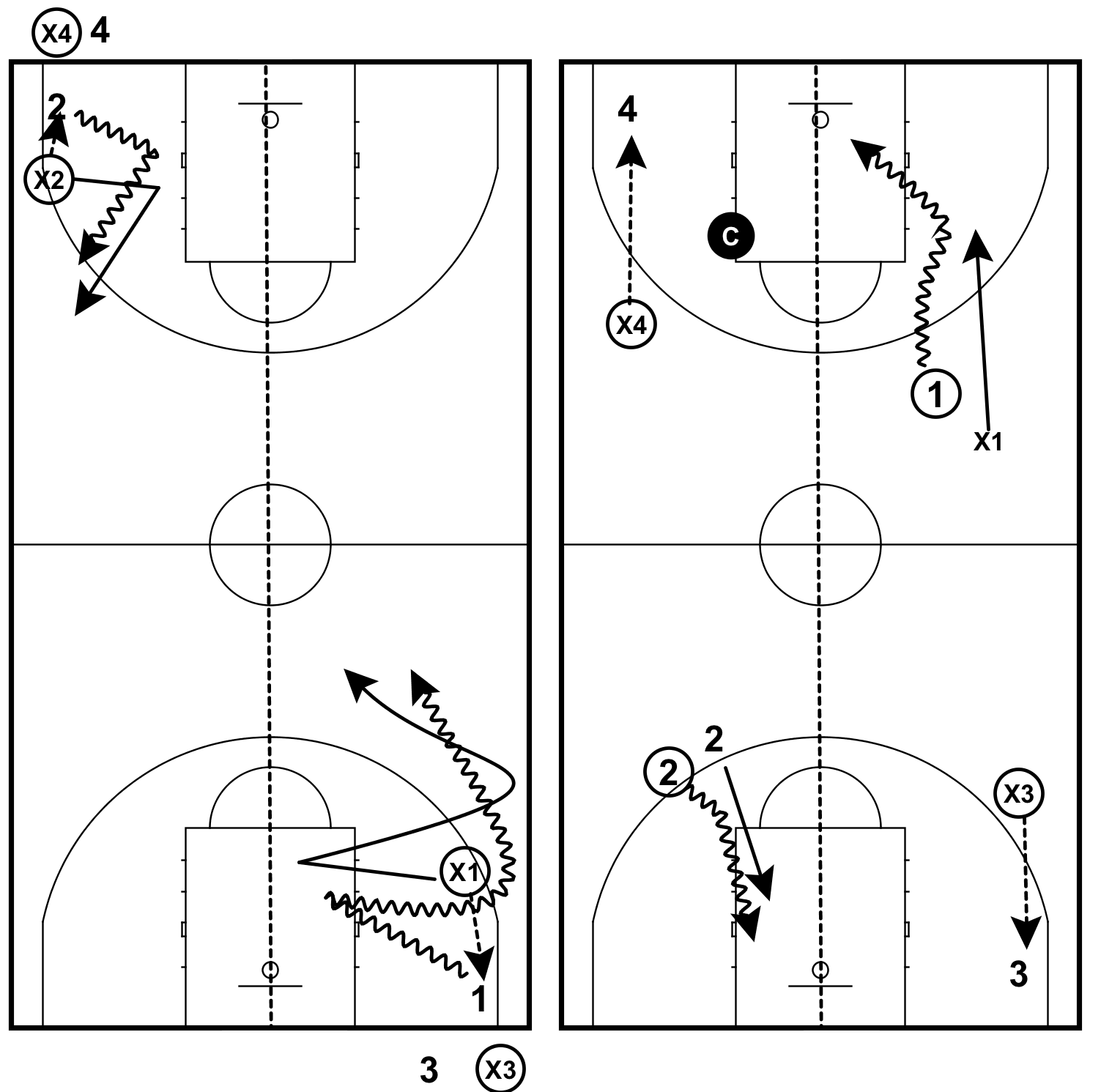 After the play is over, offense & defense switch & attack the opposite basket. The next group can begin once the previous one is safely out of the way.

Time: Play for six to eight minutes. Switch partners every two minutes but each player keeps their own score throughout the drill. Score: Stay on one side of the court. If there is a shot, steal or violation, the possession is over. One basket is equal to one point. Work:Pause Ratio: 1:1/1:2.

Early in the season, the coach may choose to allow the defense to recover in the first half if they are beat & only play live after crossing half. As the playoffs approach, load the drill by allowing hand-checking or limit dribbles/time.

A guard blasts out of the corner & receives a pass from the coach. Read the defense while cutting & create an advantage with a strong first step. Read the help defense & determine if it is possible to finish. If the path to the rim is cut off, hop-step & throw a good pocket or lob pass to the big.

Time: Play for five minutes (alternating sides) or for three minutes per side. Score: one point for each basket & the team with the most points wins. Rotation: Offense stays if they score or grab rebound, Defense goes to offense if they stop, the new team always comes in on defense. Work:Pause Ratio: 1:2/1:4.

Load the drill by limiting the number of dribbles, passes or times. Call a turnover if the dribble stops the ball or does not attack aggressively. Floaters & any screen is not allowed as this will become a crutch for the athletes. Coach can decide whether to allow play to continue after first shot.