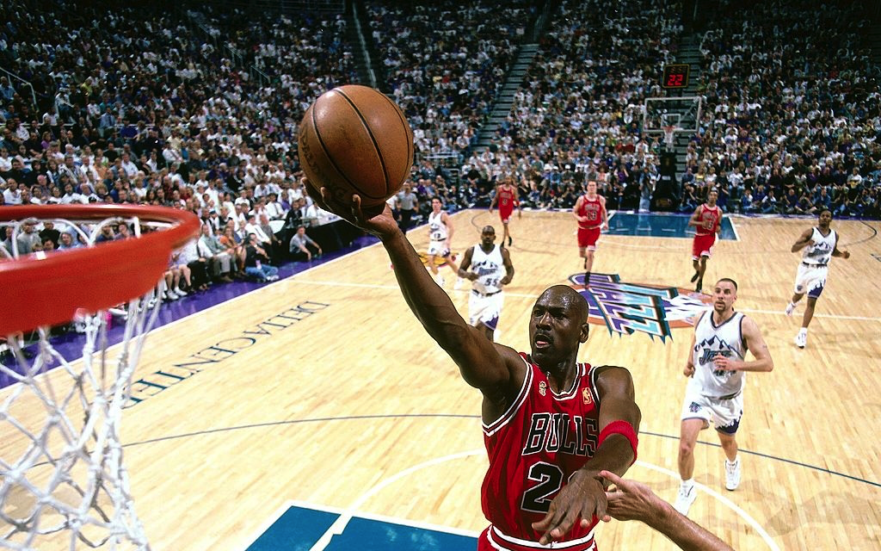 These drills help players finish at the rim at game intensity. Coaches should monitor the drills to ensure random practice, solid fundamentals & an appropriate Work:Pause ratio to develop explosiveness (1:4).

Set up three agility poles or pylons in a row. The first player curls around the top cone using an outside foot pivot as they receive a pass (outside hand pass). At the first cone, they use a ball move to beat one defender; at the second cone, they use another move to beat the help defense & get to the rim.

Rebound your own shot & take the ball to the other line. Cut immediately after passing to ensure a continuous rhythm of players coming from alternate directions at finishing in traffic. 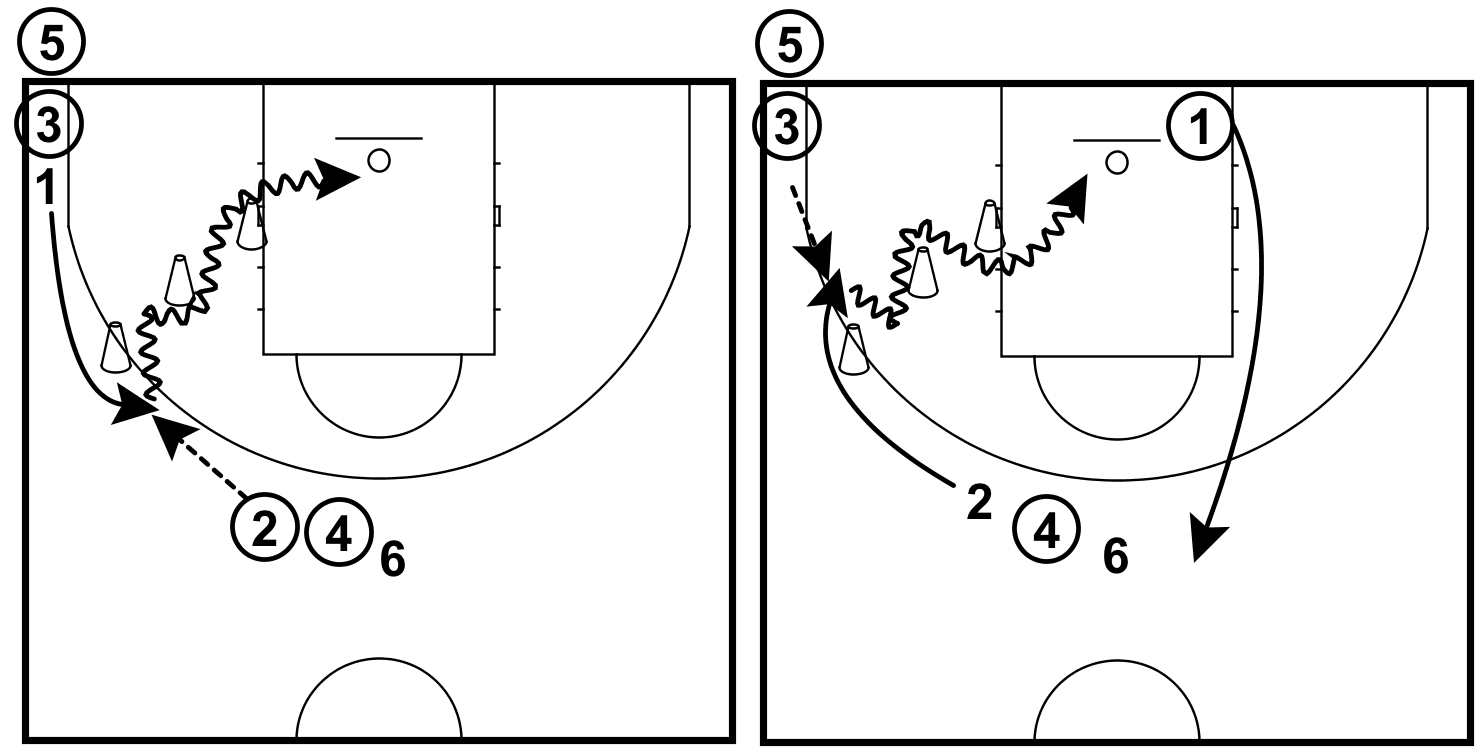 Ball Moves at the Middle Cone:

Once the ball moves & finishes are mastered, ensure that the drill is performed at game speed. The drill can balance fundamental execution with creativity & experimentation.

Load the drill by calling for more complex finishes or asking players to demonstrate different moves without repetition. Mix up the alignment of the cones to simulate unusual angles of attack. Some players should focus on a particular hand in order to improve weak areas.

As a coach plays guided defense, one player lifts or drifts to get open. Their teammate throws a skip pass at rim height to that spot. Begin with one or two dribble drives to the rim, then one-dribble pull-ups & finish with catch & shoot three-point shots. Rebound the ball & take it to the other line.

To avoid block practice, coaches should mix up the defense & force players to catch the ball in different parts of the floor. The passer cuts as soon as they release the ball. 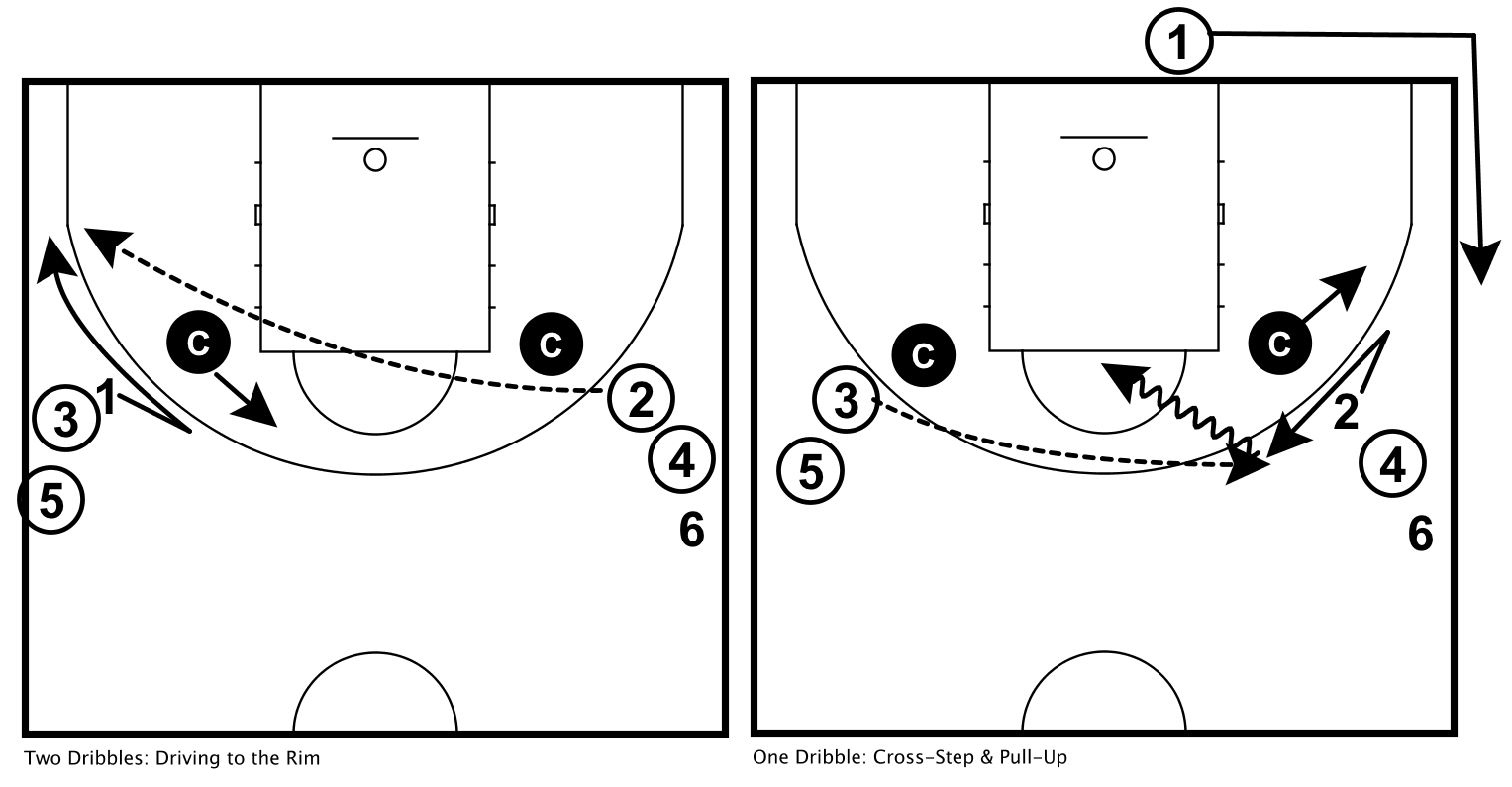 Time: Work on each type of shot for a minute or until a certain number of made shots has been achieved. Work:Pause Ratio: 1:4.

Load the drill by creating teams at each hoop that compete with each other. Call turnovers for bad passes, sloppy footwork or stopping the ball. Another coach or manager can use a pad to simulate finishing against contact for the first part of the drill.

The team is divided into two squads, who line up on opposite sides of the half-court line. Two players begin against one defender. Run lanes (edges of international key) & attack defender so that they commit. Make an early entry pass (bounce pass or lob) or use a ball move to get pass the defense & finish at the rim.

The offensive player should make a decisive move towards the basket & utilize changes in speed. The defender must keep their feet moving, stay low & avoid reaching in. Finish with the ball away from the body. One shot only. Do not settle for outside shots. 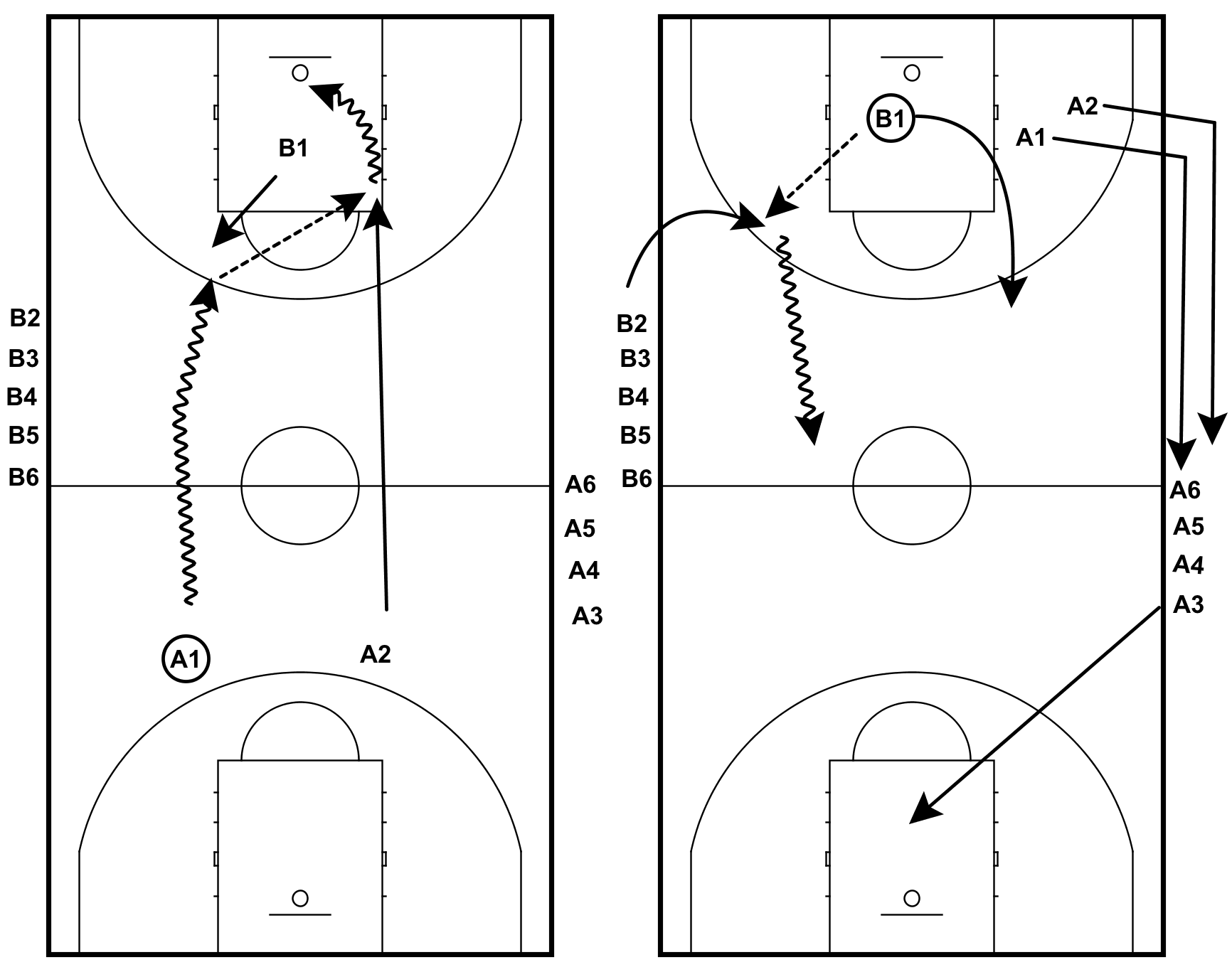 After the basket or rebound, the defender takes the ball & makes an outlet pass (overhead pass) to their teammate who has just entered the drill. Outlet passes should be caught with the back to the sideline. The two players move down to the other end to play against one defender. The offensive players go to the end of the line. The drill is continuous.

Time: Play for five to seven minutes. Scoring: Made baskets & defensive fouls are worth one point. Work:Pause Ratio: 1:4.

Load the drill by making charges worth three points. Lower the shot clock for each possession to seven seconds or less or introduce an element of pressure by permitting the team that just played offense to press until half-court.

Mimicking a full-court out-of-bounds situation after a made basket, the offense must inbound the ball, push it & create a good scoring chance in eight seconds. One player inbounds the ball & two players work together to get open. Try to catch the inbounds pass on the move (cutting across the foul line extended or streaking up the sideline) in order to pressure the opponent.

The defense can defend the situation using whatever tactics that they want. It is up to the offense to read the situation & create an advantage. Try to get to the rim & finish. If not, draw the help & kick to an open teammate. Debrief afterwards to help the players reflect upon their decisions & film the drill if possible. 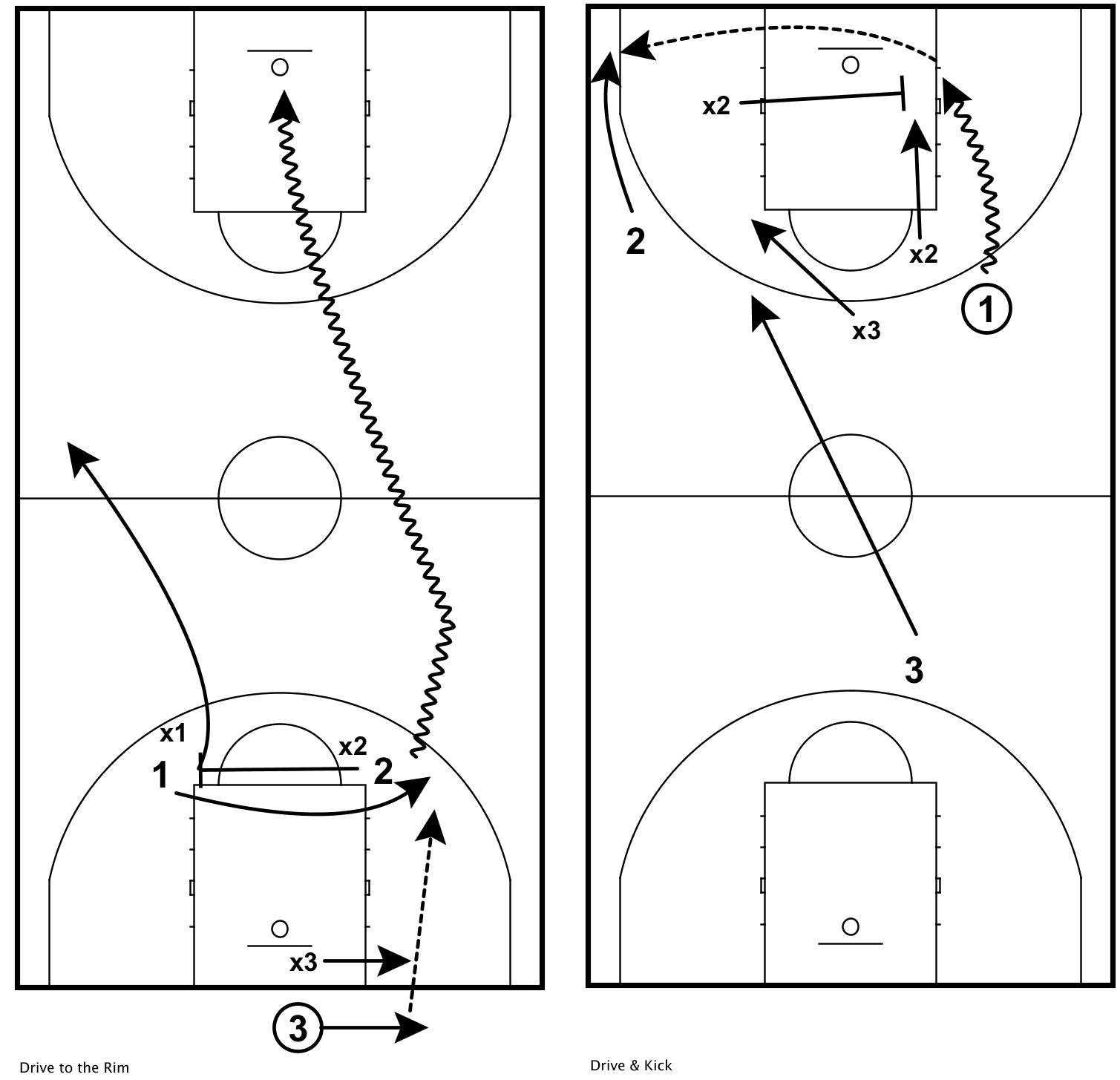 Time: Six minutes today or five possessions per team. Between sets, there should be limited pauses in order to simulate game conditions. Scoring: Every basket is worth one point. Lay-ups and three point shots are worth the same amount to encourage players to drive into the paint rather than settling for an outside shot. Work:Pause Ratio: 1:4.

Load the drill by reducing the amount of time on the shot clock (i.e. six or five seconds). Players could use different stationary inbound positions instead of running the baseline. The coach could also vary the score & team foul situation to encourage critical thinking.

The drill becomes an opportunity for players to demonstrate their mastery of ballhandling & finishing skills. Tyus Edney (1995 Tournament, drive to the rim in 4.8 seconds) & Villanova (2016 Tournament, drive & pitch for a three in 4.7 seconds) have demonstrated that you can create a variety of good shots in less than five seconds.