I was at a Toronto Triple Threat workout to work with bigs and put in some of these drills. I also put the drills online on Canada Basketball’s Game Plan Site.

These are five basic post moves that are part of every Team Ontario practice. Perform each move three times from both sides of the court

Players pass the ball to the coach on the wing and establish position inside. If coaches are unavailable to pass or play guided defense, players can self-pass the ball. Load the drill by adding a defender using a blocking pad. 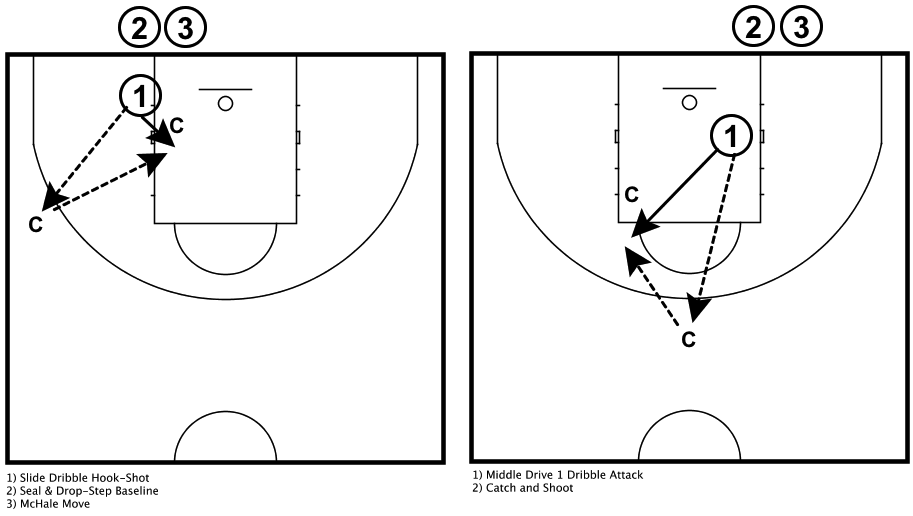 Player 5 stands in the middle of the lane. Two defenders stand on each side. Coaches with ball (or guards working on post entry passes) occupy positions on the wing.

Player 5 seals one of the defenders and calls for the ball from one of the wing. Pass the ball away from the defense so the player can score quickly. The defense provides a guided read by sealing one of the sides & the offense must adjust. Players must remain in the lane.

Rotation: Players must remain on offense until they score or are fouled. The player who is scored upon then goes on offense.

Time: 5 minutes or until a player has reached a pre-determined target, such as five points. Work:Pause Ratio: 1:1

Progression: Go live & encourage more active defense. Players compete until they have reached a predetermined target. Allow putbacks or reposting to encourage the defense to finish the play.
2-on-2 High-Low Advantage (C)

Player 1 attacks the basket and reads the defense.

Alternate offense and defense for five minutes. To load the drill, make it a competitive game to five baskets

Two offensive players occupy each block. Two players play normal defense. When the coach slaps the ball or throws a skip pass to the coach on the other wing, the play is live. The ball side player sets a cross-screen for a teammate. The defenders cannot switch. One player comes to the strong side block; the other comes to the high post. The ball is entered into one player.

Play a competitive game for five minutes to a certain number of baskets. To load the drill, introduce additional points for offensive rebounds.