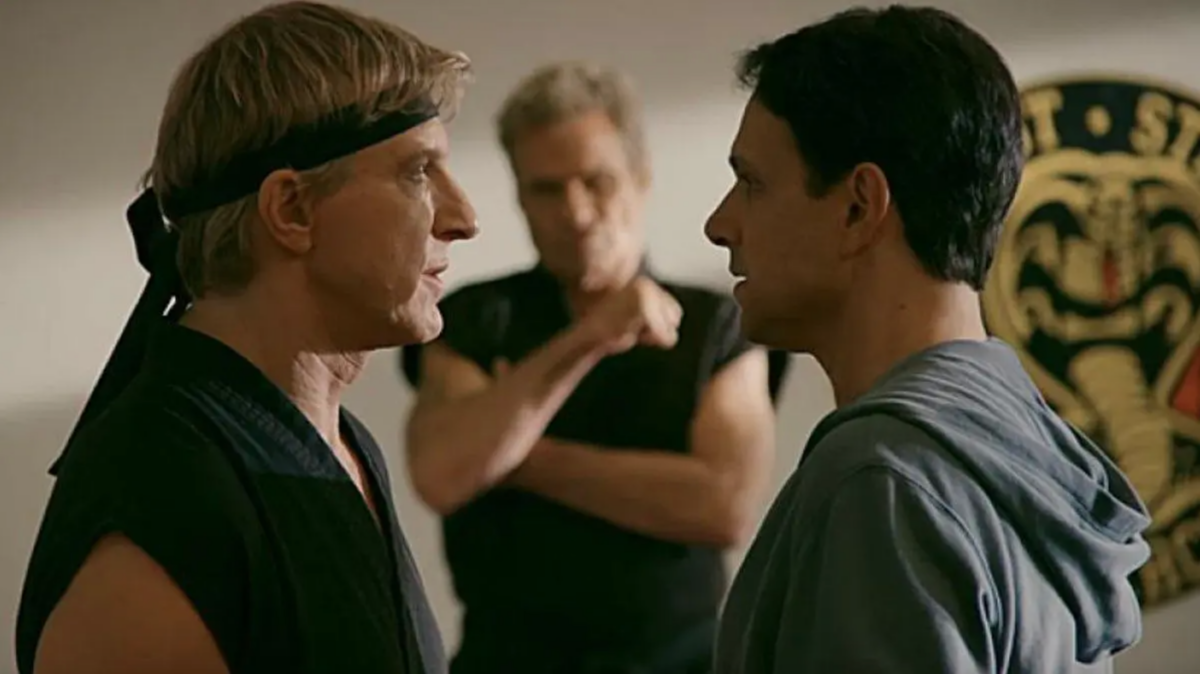 Watching Cobra Kai on Netflix, I was thinking about how this highly unrealistic show could be applied in the real world. Certainly, basketball coaches shouldn’t covert their clubs into gangs that brawl with their neighbourhood rivals but I thought of some other ideas and sent them to the Internet. Spoilers after the break.

Obviously, the conflict in the show stems from the history between the two protagonists, Johnny Lawrence and Daniel LaRusso. Their animosity is intensified by the rivalry between their dojos during their youth. While the negative events of Season 2 show the consequences of extremism, Cobra Kai has a firmly articulated philosophy. Miyagi-Do’s “balance” is vague and Daniel doesn’t firmly articulate how you can get there. On the other hand, Cobra Kai has artifacts, routines and key words that represent what they stand for.

“Strike hard, strike first, no mercy” appeals to the kids who were marginalized like Aisha, Bert and Hawk. Good or bad, they become more assertive. Since Cobra Kai also does a better job of meeting their students where they are, they engender more buy-in. Daniel becomes frustrated that the Miyagi-Do students are not as focused as he was but he is not as open to adaptation. The competing demonstrations at Valley Fest show how Johnny has been more successful in creating a fun and energetic environment at his dojo.

“It’s all about the blue mats.”

When Johnny and Daniel blindly copy the philosophies that they learned when they were younger, they fall short of their expectations. If you don’t move forward, you become stuck in cement. Yet when they reflect and incorporate something new, they gain insight. Johnny motivates his dojo before the tournament when he links the “No Mercy” slogan to resilience in life and Daniel gives his students a practical way to practice balance when he sees the tire rotating at his dealership. Even Robbie is able to utilize his skateboarding skills in the final match at the tournament. When leaders look to innovate, they succeed. Even a subtle change – like ordering new mats for the fiftieth anniversary of the All-Valley Tournament – might inspire someone.

Mr. Miyagi was an effective leader because he modelled his principles and found subtle ways to show confidence in Daniel. When Daniel is dared to break the ice blocks in The Karate Kid, Part II, Mr. Miyagi doesn’t bail him out but bets $600 that he will succeed. Johnny gives Miguel his old gi to acknowledge all of the hard work he put in. All the other Cobras cheer on Bert during his match at the tournament. In Season 1, this added confidence helps all the student transform themselves positively.

“But I just recently won the Black vs. Red Challenge at Coyote Creek.”

John Kreese definitely takes the Cobra Kai ethos too far and misses the point that it’s a means to an end, not an end to itself. Sessions are more competitive and students push each other. Johnny believes in forging a competitive cauldron in his session. Practices should be tougher than games. The Cobras don’t settle for the hierarchy that existed on the first day. Competitions like the one at Coyote Creek force the students to think creatively. Sparring can result in more injuries in martial arts but on this show, it seems to raise training intensity when done in moderation.

When people like Demetri, Hawk, Miguel and Stingray take control of their situation, they feel better. They stop worrying so much about what others think – since they cannot control that. Johnny begins to take control of his life by opening the dojo and cleaning his apartment set him on the road to positive life changes. Daniel remains pulled between his family, the car dealership and his own past, always reacting instead of making the right decisions. So far, he hasn’t been able to prune his life like it is a bonsai tree.

Initially, there are a lot of benefits but as things take a turn for the worse in the second part of Season 2, nobody can escape ownership of their choices. There is so much happening in a karate tournament or life that one needs to focus on things within their locus of control.