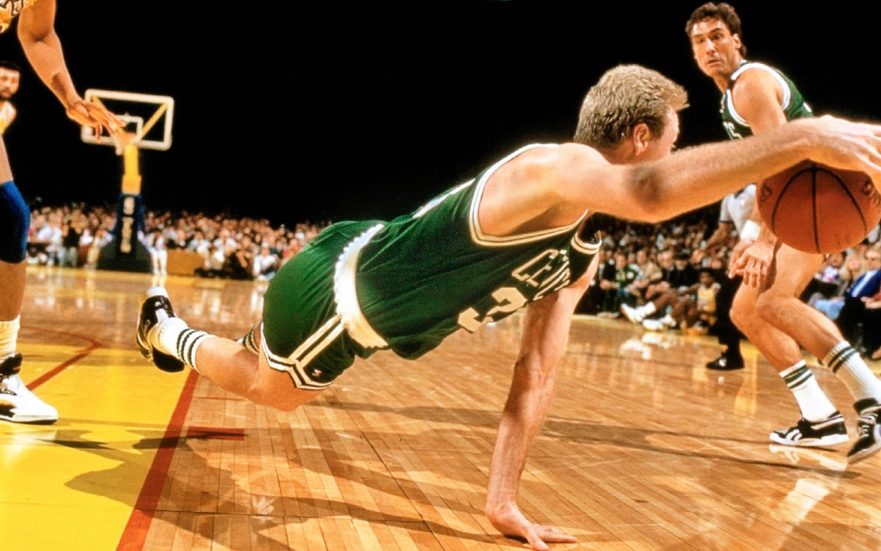 Larry Bird once said that he “always hated seeing someone watch the ball roll out of bounds.” The quote summarizes a player who could do it all: shot, score, rebound, pass, dribble and defend. Although he was a superstar, Bird would hit the floor, dive into the stands, encourage his teammates and play through pain. From his parents, Bird learned to never take a day off – or in his case a play or a game.

When describing Bird, players and coaches use words such as “grit,” “drive” and “competition.” To develop that legend, Bird had to apply that work ethic every day. Even when injured, Bird was resolute about putting in more work so he could be ready for games, in rural Indiana as a college player or in Monte Carlo when finishing his career with the first Dream Team.

But Larry Bird is the exception and the 1980s Boston Celtics teams are stilled admired today. Is it possible to instil some of Larry Bird’s characteristics in every athlete? When basketball players compete, they do better in all facets on the game.

To win games, a team must practice deliberately. Individual drills lead to improvement but for a team sport such as basketball, deliberate practice must be collaborative. Small-sided games provide opportunities to practice the randomized tactics and strategies that are required for success on the court. When teams track stops and scores in a dribble drive scrimmage, the players will naturally see how spacing and timing work by the points accumulated on the scoreboard.

Adolescents consume a lot of games so they are looking for that type of similar diversion. When drills are loaded and progress into a competitive situation, players are working together in realistic situations that push physical and mental limits. Effective deliberate practice in game-like situations is linked to improved performance.

Competing in small-sided games is effective interval training for basketball because it raises heart rate, blood lactate levels and rate of perceived exertion. Players can reach eighty-percent of their maximum heart rate while combining physical conditioning with tactics and techniques. Using the entire court instead of checking from the top and work:pause situations that mimic games provides a fun way to build athletic abilities for basketball.

It’s important not to make the competition too complicated. For the 14U age group, they are still learning the game so 3-on-3 situations with coach feedback produce the highest level of intensity. The 16U age group is more advanced so a competitive 4-on-4 situation with minimal coach feedback creates the highest effort.

Learning must be fun for youth to truly dive in and embrace it. Designing games so that they teach skills and tactics in fun situations will improve learning. The fast-paced environment of small-sided games – which generates more touches, more shots and more movement for each player – is more exciting and dynamic. Competitive situations create opportunities for athletes to make decisions and solve problems, which build fluid intelligence, based on performance under pressure.

Rather than work on single file ballhandling lines, consider something like 3-on-3 fullcourt to apply those skills in a vibrant setting. By keeping time and score, coaching can reward the group for overcoming a challenge together and also assess which players do well in game-like situations, which can only help the team.

We can’t control whether we have Larry Bird’s skill or talent but we can control whether we compete. Bird competed every time he entered the gym and took pride in doing so. Despite his success, Larry Bird always felt that he had something to prove. To prepare for adversity in games, Larry Bird wanted to compete every practice, whether it was battling Cedric Maxwell for playing time as a rookie or taking a big shot in a shooting contest, Bird wanted the ball in his hands.