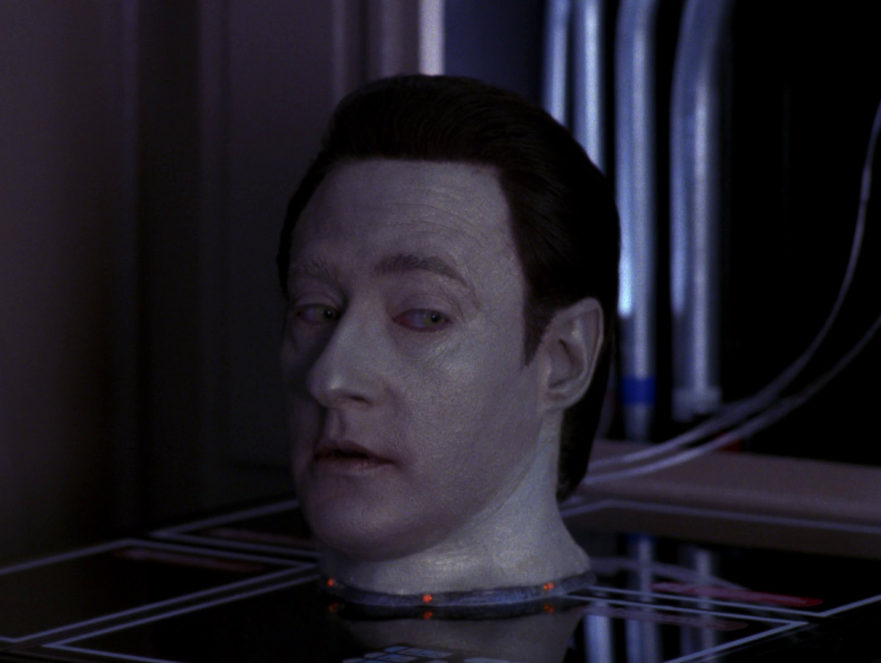 For me, one of the fascinating aspects of Star Trek: The Next Generation is their collaborative problem solving. All team members have a role to play and everyone’s best efforts are integral to success. Characters don’t come to blow, there are few battles between egos and situations must be analyzed critically. In the episode “Disaster”, the Enterprise is impacted by quantum filaments and all members of the bridge crew must step forward and lead.

Delegate Responsibilities: Captain Picard is stuck in the turbolift with three children who received top honours in a recent science fair. Children have long been a nemesis for Picard who initially did not believe that they belonged on a Galaxy-class starship. Picard had broken his ankle but the turbolift was severely damaged and in danger of falling down the shaft so an evacuation was necessary.

The children were nervous and scared but Picard needed their help. Speaking sternly did not alleviate their anxiety and may have exacerbated the situation. Picard assigned positions to each child: First Officer, Science Officer and Executive Officer in Charge of Radishes (based on a science project). They were given duties such as investigating the damage to the turbolift and making a splint for Picard’s ankle. The captain was able to give the children some control of their situation. It finally became necessary to climb up the draft so Picard adapted his tactics and encouraged everyone to sign a climbing song.

Be Creative: Lieutenant Commander La Forge and Doctor Crusher were trapped in the cargo bay when a plasma fire erupts. Unfortunately, the contents of the shuttle bay are highly explosive fuel tanks that become unstable when exposed to radiation. The transporters are inoperable and the anti-grav lift is too unsteady to use. The pair physically moves the heavy drums away from the fire in order to lower the contamination but the conditions remain perilous.

La Forge realizes that they have only bought themselves time and begins to think outside the box. He proposes to open the cargo bay doors as the decompression will suck the combustible containers into space and deprive the fire of the oxygen it needs to burn. The plan works but the lack of oxygen disorients La Forge and Crusher must race to another panel to reestablish the atmosphere in the cargo bay.

Adapt to the Situation: A pleasant outing in Ten-Forward takes a turn for the worse when the ship is struck. Since power is intermittent throughout the ship, the bar becomes a makeshift sickbay. Lieutenant Wolf must take charge and tend to casualties. Just when it seems that everything is under control, Keiko O’Brien goes into labour and the Security Chief must deliver the baby. Worf initially protests that it’s not a good time and reports that the training simulation was inaccurate. He quickly accepts that he cannot control the situation – only his actions – and gets the job done.

Sacrifice for the Team: Commander Riker and Lieutenant Commander Data utilize the Jeffries tubes to access engineering but soon find themselves trapped between a poisonous coolant leak and high voltage electrical arcs. Data supposes that his tripolymer frame can withstand the electric shock so he suggests that he use his body to interrupt the flow of the current. Riker understands that they will need Data’s computational abilities and initially forbids it. When Data informs the First Officer that he can later detach his head and bring it to engineering, Riker gives permission.

When they arrive in engineering, they appreciate the urgency of the situation. The bridge had routed emergency power to the display panels so whoever was down there could see that the warp drive containment field was failing. Although the ship is about to explode, Riker remains calm (Data is always calm and collected). Riker connects Data’s head to the computer and the crisis is resolved.

Refuse to Compromise: On the bridge, the red-shirted duty officer dies when the second quantum filament hits. Counsellor Troi (who is a Lieutenant Commander by rank because Gene Roddenberry believed that mental health would be as important as physical health by the twenty-fourth century) rarely commands the ship but she must take charge. Troi consults with Ensign Ro and Transporter Chief O’Brien but ultimately makes the key decisions herself.

When the containment field difficulties are detected, Ro wants to separate the saucer section to create separation from the warp core explosion. Troi wants to provide engineering with more time to fix the problem. Ro questions the wisdom of that choice but Troi holds fast to her position in the face of opposition. However, she does not put all of her eggs in one basket and orders preparations made in case they must separate the saucer.
Troi learns from the experience and later decides to increase her training and qualifications so that she can command the ship regularly.

To resolve the challenging problem, everyone must step forward and contribute. Everyone must be a leader.