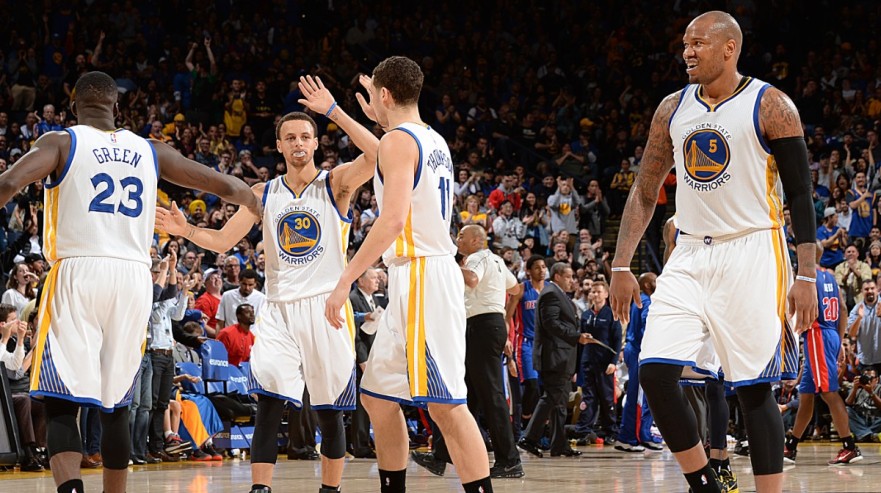 The first half the N.B.A. season has demonstrated the progression of offensive basketball at the highest level. Young players can develop their own game by playing with focus and patience and applying some of these elements. When young teams run discipline sets, the ball moves, everyone looks good and the team takes advantage of good looks. If that same team rushes, disjointed basketball unfolds and teams look their age. Any team can play hard, play smart and play together on offense.

Coaches should study the best teams in the league because they are applying concepts that work against the most athletic and smartest defenders in the world. Obviously, young players will not possess comparable skills to professionals but there are other elements such as ball movement, cutting and patience that can be duplicated. These plays can be adapted for any level and coaching philosophy.

Golden State gets a catch and shoot jump shot 31.6% of the time and shoots a league high 60.4 eFG%. 47.7% of the Warriors’ shots are open or wide open, partially because of their excellent spacing, and they generate 69.6 points per game from their assists. When a teammate drives, they need to see someone in the corner so they can make an easy pass. Regularly filling those corners – in the halfcourt or in transition – creates high percentage shots. The Dubs run 2.11m/s in order to get to those spots.

Youth teams love to watch the ball on defense so spreading the floor will take advantage of any attention lapses and force difficult closeouts. Out of the corner, teams can shoot or attack the defense a second time to generate an open look. Passes can generate more points than impatient drives.

Indiana has increased its pace from 92.5 to 97.2 and three-point shots attempted per game from 21.2 to 24.6 in order to maximize the strengths of its smaller but more athletic personnel. The Pacers shoot 40.4% on catch and shoot three-point shots. Indiana has created some of these shots by making the extra pass quickly. On the ball reversal, when the ball gets to the opposite corner quickly, it is an extremely long closeout for a high percentage shot.

San Antonio is second in the league with 25.2 assists per game and fifth with 62.9% of baskets assisted. The Spurs’ offense has slowed down this year but the team is still capable of sharing the ball. When Gregg Popovich draws up a play for a player, he means for that player to create the best shot for the team. San Antonio makes 348.8 passes per game in order to achieve that goal.

When the ball moves so quickly, it is frustrating for the defense because as soon as they have closed out one opponent, the ball is in the hands of another open player and the advantage is maintained. In this case, the Spurs make eight passes in one possession and finishes with a give and go for David West cutting down the lane.

Twenty-eight percent of Oklahoma City’s possessions end in a screen and roll situation. Screeners like Serge Ibaka and Steven Adams are big bodies who can finish near the rim and the Thunder leads the league in feeding the roller and scores almost half the time when the screener touches the ball.

Some ballhandlers force a pass too quickly, instead of waiting for the defense to shift and the opportunity to develop. When a screen is initially set, multiple defenders are also brought together. Taking a moment or a dribble to assess the situation and read the second level of defense increases flexibility for the ballhandler. Russell Westbrook and Kevin Durant are skilled scorers but they also use moves such as a hesitation or an inside-out dribble to force the defense to commit. When the screener’s defender or the help commits, they move the ball.

Cleveland gets 1.09 points per possession when they hit the roll man on a screen and roll action. To obtain that success, the screener must roll or pop to a location where they are a threat to score. Also, the ballhandler must create enough space so that a defender cannot guard two players. The Cavs shoots 37.5% on open three-point looks so it is a good shot for the team if they get the ball to a player who has popped into open space.

The team doesn’t allow the defense to focus on the screen and roll, devoting five defenders to two offensive players. The defense will try to cheat in order to stop the ballhandler and guard the screener so little variations such as hammer screens, pin downs and cuts can involve the other three players and generate excellent scoring chances. If everyone is in a good scoring position and willing to screen and cut, the team can benefit from many high percentage shots.

Pass Up a Good Shot for a Great One

Toronto’s offense is guard-centric, devoted to isolations (8.7% frequency) and screen and roll finishes by the ballhandler (20.2%). Toronto is an above average team when shooting catch and shoot threes (37.2%) so if a ballhandler draws additional defenders when driving, it’s worth about twenty-eight percent more points per possession to kick the ball to an open shooter.
DeMar DeRozan could have finished this drive, as he generates about three-quarters of a point for each drive but he kicked the ball to Cory Joseph in the corner, a shot with an expected value of twice DeRozan’s drive.

Los Angeles leads the league in D.H.O.s (7.4% frequency and 0.92 points per possession). It’s an effective complement to their screen and roll based offense as it takes advantages of defenders who overplay one particular action. When Blake Griffin sees that the defense is trailing J.J. Reddick (who shoots 50.6 eFG% on D.H.O.s), he gives him the ball for a pull-up shot. When Griffin notices that both defenders go to Reddick, he keeps it himself, creates room and scores.

Every play will not go entirely according to plan and it is incumbent upon players to understand what the defense is attempting to do to stop the action and make adjustments to take advantage of cheating. Players must understand the goal of the offense so they can devise other methods of achieving that end. Critical thinking can create a one-second advantage as much as a good first step or an accurate pass.