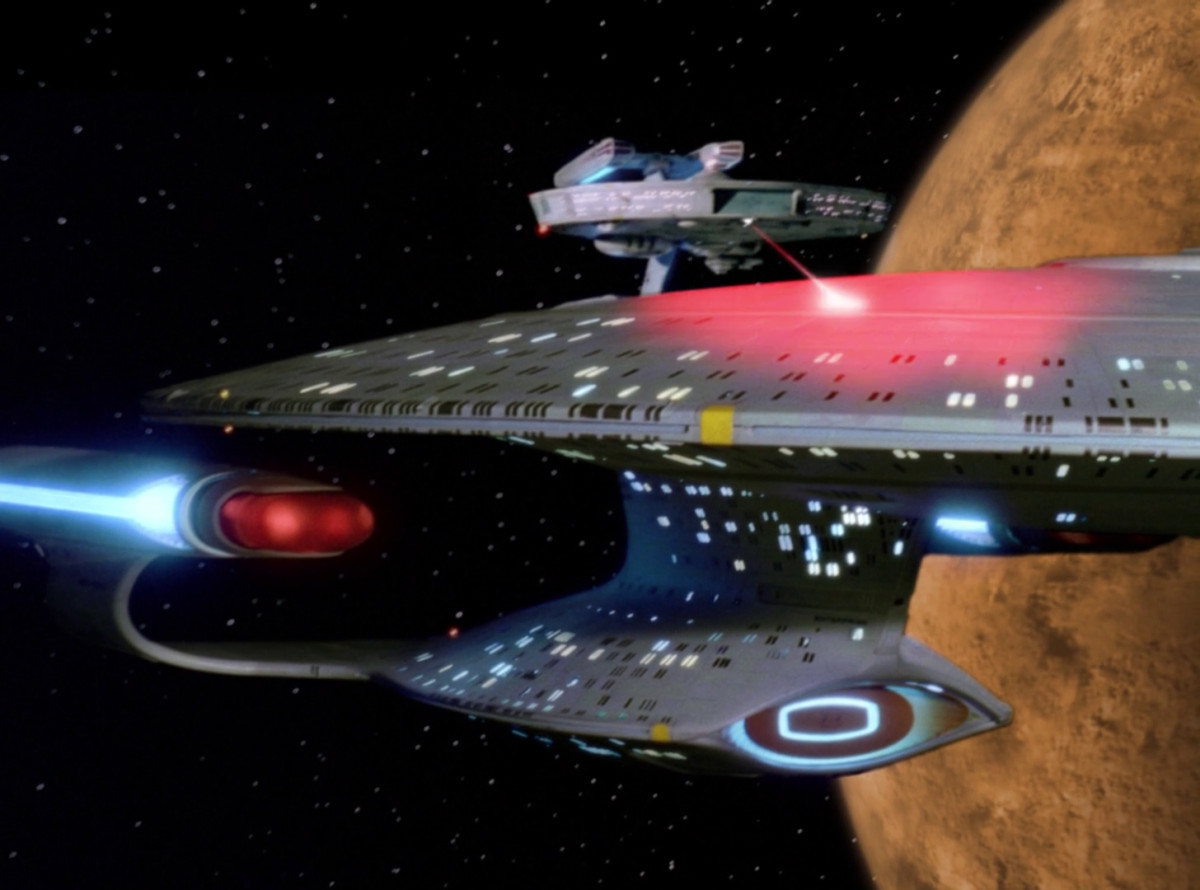 Leadership assumes many forms: some lead by example and others delegate while standing by the side, some issue precise instructions and others leave room for creativity, some focus solely on the outcome and others emphasize following the correct process to get there. During the Star Trek: The Next Generation episode “Peak Performance,” diverse crew members must act as leaders and determine what philosophy suits them best.

A Starfleet battle simulation places Commanded Riker in charge of the antiquated U.S.S. Hathaway. Accompanied by a skeleton crew, Riken is given forty-eight hours to prepare for a war games exercise against Captain Picard and the state of the art U.S.S. Enterprise. The Hathaway was decommissioned years ago and is barely function. Still, Riker, Lieutenant Worf, Lieutenant-Commander LaForge and others put achieve a valiant and commendable feat though out-manned and out-gunned.

Despite facing a superior adversary, Riker does not concede. This is symbolized by his challenge of Kolrami, a Zakdorn observing on behalf of the Federation, to a game of Strategema. Although Kolrrami is a Strategema grandmaster and incredibly disdainful towards him, Riker plays anyhow, partly for the experience and partly because it is in his competitive nature.

As soon as the beam over, Riker communicates to the crew his expectations, honestly appraising the situation and reminding them of their abilities:

I can promise you that two days from now we will have missed a lot of sleep. But with your skill and your stamina, we’ll have this old lady ready to fly.

Lieutenant-Commander Data and Counsellor Troi recognize the First Officer’s indomitable spirit when preparing for the exercise, realizing that “despite whatever logical choices [Riker] is offered, he must be … the man that he is.”

Riker wants everyone to buy-in. When Acting Ensign Crusher expresses doubts about the likelihood of success, Riker issues an ultimatum: he can leave or reaffirm his commitment to the team effort. Crusher stays and adopts the same creative and resilient attitude as the rest of the team.

After a sketchy warp drive is assembled, LaForge and Crusher are skeptical about whether the device will function but Riker does not doubt their work and praises the innovation as “better than good, brilliant, great.” Later, when the Hathaway team must utilize the two seconds of warp capability in order to escape the Ferengi who have attacked them – or die – the Hathaway team shares their captain’s confidence. They trust Riker’s judgment because he has earned their respect.

Throughout the series, one of Riker’s trademarks has been unorthodox tactics – whether in battle or sitting down. The Hathaway is decrepit, lacking a warp drive engine and modern weapons. Improvisation is imperative. Riker asked Worf: “when you’re out-gunned, out-manned, and out-equipped — what else do you have left?” The reply, “Guile,” is a slogan that motivates the crew throughout the exercise.

While repairing the bridge, an officer tells Worf that she doesn’t know where to get the opticable needed for a console. He rips some cables from the ceiling and tells he to get it wherever she can. The Klingon realizes the futility of a direct attack on the Enterprise so he employs misdirection – a sensor distraction – to increase the variance of the simulation.

Riker requests that Wesley Crusher join the away team because he values the engineering prodigy’s ingenuity. Crusher is able to rig a rudimentary warp drive, which luckily saves the day at the end of the episode.

Enable Others to Act

Picard has always appreciated the contributions of those under his command. Kolrami suggests that the captain select the crew that will travel to the Hathaway for the mission but the captain believes that to reach his full potential during the exercise, Riker should be permitted to makes his own choices, as he will be the one who must live with the consequences. When the Zakdorn repeatedly criticizes Riker, Picard staunchly defenders his first officer in his ready room and expresses total confidence in him.

Initially, Work does not believe that he is suitable to be Riker’s executive officer aboard the Hathaway. Riker reminds him that he is an expert tactical mind who is more than capable to serve at his side during the simulation. Afterwards, Worf embraces his roll and begins guiding and leading other crew members.

The person who requires the most encouragement from a leader is not a person at all. After losing a Strategema match, Data requests to be relived of his duties. While sulking in his quarters under the guise of performing self-diagnostics, Data is visited by several colleagues. Finally, Picard reassures Data that it possible to make no mistakes and still lose.

When Data accepts that it is the process that matters, not the outcome, he resumes his rol as executive officer for the exercise. As a condition of returning to the bridge, the captain tells Data “to leave the hesitation and self-doubt in [his] quarters.”

When the Ferengi ambush the two ships, Picard seeks counsel from Data, evaluating him based on his long track record, not a single mistake that recently occurred. The collaborative solution saves both crews, a benefit that was not possible if Kolrami’s recommendation to retreat had been followed.

Meanwhile, on the Hathaway, the dismal condition of the ship demands that Riker lift everyone’s spirits. The engine room may be obsolete but Riker heartens LaForge and tells him that he is sure that the Chief Engineer will perform his “usual miracle.”

Controversy surrounds Data’s two Strategema matches with Kolrami. Data loses the first, triggering a crisis of confidence as he believes that the loss exposed his vulnerabilities, but wins the second when his opponent abandons the game. Although Data possesses an abundance of circuits and programming (people and computers both have some sort of hardware and software) which should aid his cognitive processes, a dynamic game like Strategema requires a player to recognize visual patterns within microseconds and evaluate dozens of possible moves. It is likely that the Zakdorn has honed his brain’s ability to perform these tasks while Data’s positronic net is not as attuned to doing the same as quickly.

Data recognizes that he must adapt and evolve. The android plays for a tie, generating patterns which are unfamiliar to the grandmaster and forcing him to consider novel options. Kolrami cannot cope with the stress and throws down his controller in frustration.

At the beginning of the war games contest, Riker asked for the Zakdorn word for mismatch. Kolrami replied:

Challenge! We do not whine about the inequities of life. And how you perform in a “mismatch” is precisely what interests Starfleet. After all when one is in the superior position, one is expected to win.

Flexibility during preparation and the disciple to stick to the plan enabled Data to achieve an upset and “bust him up.”