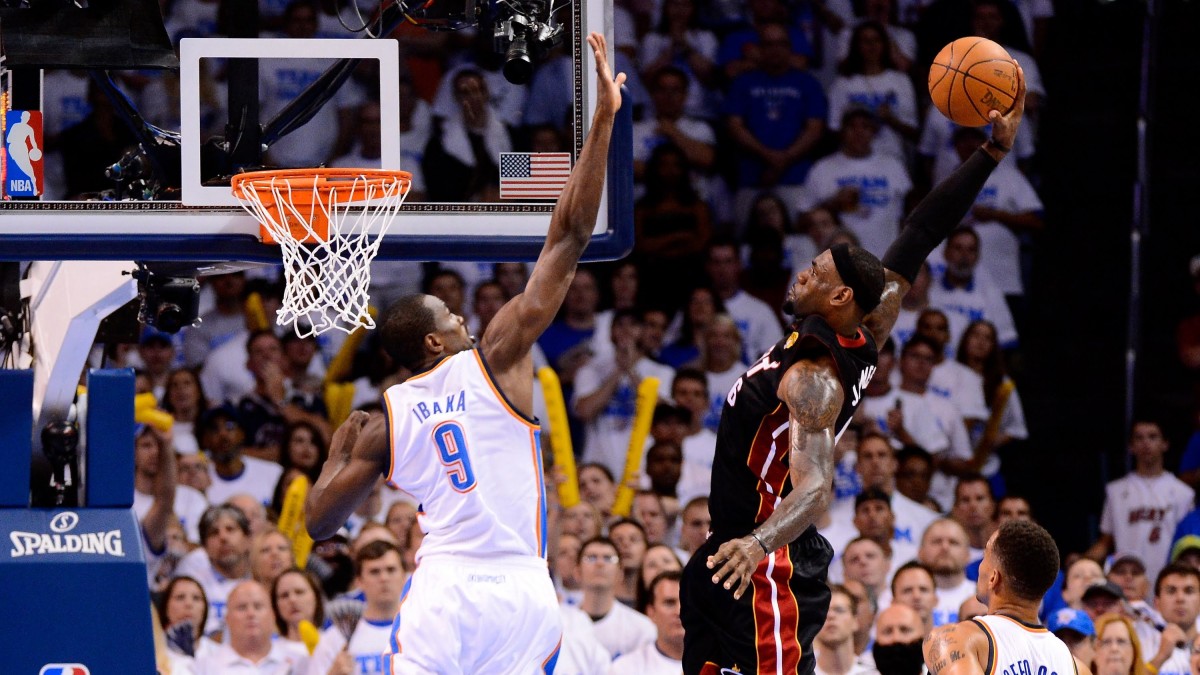 On the eve of the Western Conference Championship series, the announcement that forward Serge Ibaka would miss the remainder of the playoffs was an inauspicious announcement for the Oklahoma City Thunder. Although the number two seed behind the San Antonio Spurs, the team possessed a certain edge, evidenced by their win in the 2012 Conference Final and a 4-0 sweep of the season series this year. The explosive athleticism of Kevin Durant, Russell Westbrook and Ibaka was a factor that the experience and execution of the Spurs could never match. Despite a seemingly insurmountable obstacle, the Thunder can still win, if they play the right way. It won’t be easy, but it is possible.

Ibaka’s contributions to the team were primarily due to his defensive shot-blocking presence and ability to consistently hit a midrange jump shot when the defense helped on Durant and Westbrook. His physical tools enabled him to be a quick screen and roll defender and successful rebounder. After the two All-Stars, Ibaka was clearly the third-most important player on the squad, in terms of plus/minus and usage rate (Reggie Jackson posted comparable per minute numbers but Ibaka was the main inside force).

Other players can step up. Ibaka’s rebounding and defensive ratings numbers are comparable with Steven Adams and Nick Collison, who will serve as his primary replacements. Among the team’s most effective lineups, Adams and Collison’s names appear as often as Ibaka’s, although they have played many less minutes. Apparently, the playing next to the combination of Adams and Collison frees Durant to achieve his highest true shooting percentage out of all frontcourt combinations. In clutch situations, Ibaka was not a big contributor.

Although Ibaka’s extraordinary shooting percentage provided the team with critical baskets, Oklahoma City can employ other strategies to attack the Spurs. It will certainly be a challenge, as Ibaka demanded constant attention from the defense and starting centre Kendrick Perkins does not. San Antonio players were always mindful of Ibaka, especially Tony Parker and Manu Ginobili, and he impeded their ability to drive into the paint but other players have defended well too.

But it is unknown whether Perkins, Collison and Adams can pick up all of the slack at the same level for the entire game or without fouling out. Haseem Thabeet is not an especially potent defender and he may not guard Tim Duncan and Tiago Splitter or help as well as Ibaka.

It would be easy to say that Westbrook, Jackson and Durant should drive relentlessly because the older Spurs have always had difficulty coping with this tactic, going back to the efforts of James Harden in 2012 but I think this would be too myopic to triumph throughout a seven-game series. There will be chances for the Thunder guards to exploit their quickness but they cannot become too isolation-centric. Also, since the remaining OKA bigs have a much shorter range than Ibaka, the paint could become very crowded.

The Spurs maintain precise defensive positioning and force opponents to shoot a low percentage. There is a small window of opportunity within the first ten seconds of the shot clock when San Antonio gives up a much higher field goal percentage before the opponent’s likelihood of scoring gradually decreases as the shot clock winds down. When the Thunder have beaten the Spurs, they have generated high scoring runs, often by forcing a steal or grabbing a rebound and pushing the ball down the court before the defense is established.

When the OKC obtains possession, Durant, Westbrook and Jackson can get down the court and finish within six to eight seconds. They should not rush a shot but if they can pressure the Spurs into a bad pass or an ill-conceived drive into traffic, they should move the ball as soon as they can.

An older Ginobili, Marco Belinelli and even Patty Mills are susceptible to robust ball pressure. When there is less time and space to make decisions, Ginobili in particular is prone to poor decision-making (a negative side effect of his frenetic style of play). If the Thunder guards, especially Westbrook, Jackson and Thabo Sefolosha can defend the Spurs ballhandlers tightly, they may create some turnovers or consume time on the shot clock.

Derek Fisher or Caron Butler are less capable of pushing the tempo on defense so Oklahoma City will need to pick their spots carefully. When the ball is stopped, the Thunder players are capable of jumping into passing lanes swiftly and utilizing their length to tip the basketball.

Set Screens Away from the Basket

Durant must be guarded anywhere within the halfcourt, as the Toronto Raptors learned the hard way during a double-overtime loss this year. A defender must be proximate to the nimble forward at all times so there is an opportunity to set a ball screen farther away from the basket. Since the substitute forwards are not as much of an offensive threat as Ibaka, this is not a screen in order to feed the player rolling to the basket but generate more room for the ball handler. If the defense is spread out, even a half-step is sufficient for a full-speed KD to weave towards the basket. He’s also proficient at a pull-up jumper anywhere between the three-point line and the paint.

For Westbrook and Jackson, this increased space would impede San Antonio’s ability to ice the screen and force him baseline. Duncan usually plays under the screen to inhibit the drive but when the screen is twenty-five feet away from the hoop or more, there is plenty of room for a slashing guard to cut back and elude him. Even an All-Star like Duncan has no chance defending a dynamic player at top speed from a stationary position.

A guard-to-guard ballscreen forces the defense to make tough decisions. Guards customarily do not defend screeners so they may be a step slower in their reaction. KD, Westbrook and Jackson form such an explosive combination that the defenders usually switch and still fall behind, forcing a rotation.

This should also discourage Westbrook or Jackson from going against the world on an iso because they have to work with teammates. Durant gets the ball on the move or he might find an open space to shoot the ball. The other OKC players are involved as outside shooters, players flashing into the paint and rebounders (after the defense has rotated). Scott Brooks may not want Perkins or Collison to shoot an elbow jumper but he can accept if they dunk on a weak-side duck-in.

Ibaka is a formidable screen and roll defender but the other Thunder forwards cannot play conservatively in his absence. This leads to openings for Parker to turn the corner, shoot a floater or bully the defense into an awkward rotation.

Firstly, the guards must be tight on the ballhandler, so that they can force the play away from the paint. The remaining OKC bigs are still long enough that they can hedge aggressively or even trap in certain situations. When these two teams play, the side that has seized the initiative has almost always prevailed in the end.

Many teams deny Durant the ball in his favourite spots, including San Antonio. When defenders recognize one of OKC’s usual plays, they will shift to the high side of KD or move between him and the ball. Backdoor plays have burned the Spurs at critical junctures of their games against the Thunder this year.

Mixing up the playbook and judiciously selecting counters will keep the Spurs off-balance. The Thunder need to think outside the box so that their thin roster appears a little deeper and slightly more intimidating.