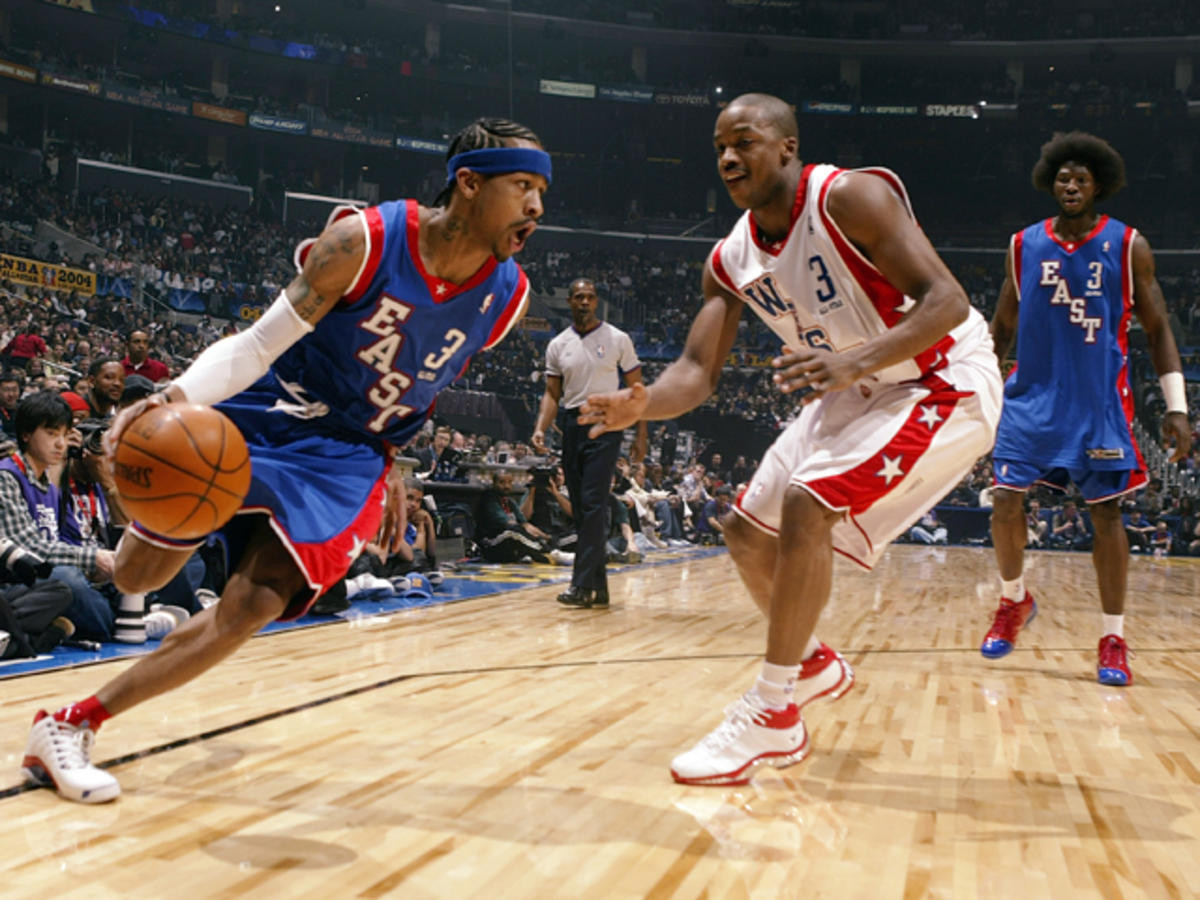 This month, both Allen Iverson and Tracy McGrady announced their intent to retire from basketball. Two athletes who were highly regarded when they were drafted (first pick overall in 1996 and highest high school player drafted in 1997 respectively) who came to symbolize the leadership vacuum and problematic Collective Bargaining Agreement of the late 1990s and early 2000s. Both players became first team all-stars but fell short relative to the high expectations they faced and the accomplishments of their superstar peers.

Allen Iverson experienced an elite N.B.A. career from 1996 to 2008. Selected first in a draft that featured strong candidates at both guard positions, effective forwards and some European players, Iverson contributed the fourth most Win Shares out of the players drafted that year, after Kobe Bryant, Ray Allen and Steve Nash.

Tracy McGrady was the ninth pick overall in a weaker draft that lacked depth after the stellar first overall pick Tim Duncan. Chauncey Billups was the only other player who created more Win Shares than McGrady.

Could Iverson or McGrady have improved their longevity or the length of their career primes? Even though this analysis is superficial, I think there are changes that they could have made to their career paths.

Dedicated practice includes focused repetitions at game speed and game intensity. Throughout his career, Iverson had trouble with this concept. In a way, he succeeded and got paid despite his focus but could he have gotten paid more and won more? The athletes ahead of him on this list are known for their workouts (Steve Nash: footwork and ballhandling, Ray Allen: footwork and shooting, Kobe Bryant: explosiveness, 1-on-1 work). Once they reached their peaks, they were able to remain consistent from year to year and sustain that productivity for a much longer time. 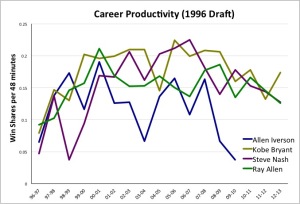 Once Nash, Allen and Bryant hit their stride, they continued at level despite losing some athleticism due to age. Iverson fell off the map when he lost his speed. A footwork regiment could have maintain his agility, even as he became less explosive. Iverson and McGrady never significantly increased their shooting percentage, unlike Nash who made great improvements and became a more effective shooter as he aged. Nash continued to get high percentage shots, even though he was slower when he was drafted. 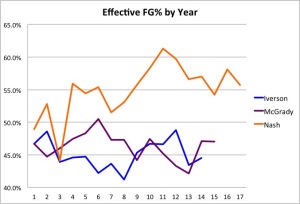 Bill Simmons recently wrote a column describing the difference between Duncan and McGrady’s pre-game routine: Duncan repeated the shots and moves he would take during the game whereas McGrady took shots without rhyme or reason.

McGrady is shown taking some casual threes despite the fact he…

Allen Iverson has always claimed to have an incredible passion for the game and has been credited for his frequent use of visualization to hone his mental training skills but the decline of his career suggests that physical training may have helped. Iverson is third overall in usage percentage in N.B.A. history, involved in almost one-third of his team’s plays). The other top five players are Michael Jordan, Dwyane Wade, Kobe Bryant and LeBron James, who are known for intense workouts with trainers like Tim Grover – whether it is during the off-season or before and after games.

Jordan added muscle mass to his body to withstand the defense of the Detroit Pistons. Wade and James have incorporated yoga and pilates in order to augment flexibility and survive an eighty-two game season and playoffs. Iverson was described by his bodyguard as someone who had never lifted a weight in his life. All of these players (except Wade) have been mostly injury free. Iverson was plagued by injuries as his career wound down from 2007 to 2010.

Several YouTube videos and web articles exist of Tracy McGrady’s fitness regiment, which is mostly resistance training in the weight room. Although he did not lift heavily before he entered the N.B.A., he incorporated the activity into his routine.was plagued by injuries as his career wound down from 2007 to 2010.

Ultimately, he was known as a player who showcased excellent abilities during his peak from 2001-2004 but was waylaid by back and knee injuries. Joint mobility, balance and flexibility exercises might have been able to ease the pain caused by these injuries. Tim Duncan lost fifteen pounds and adopted new workout techniques in order to reduce knee pain and reverse a decline in his career. 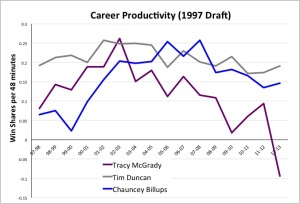 The different approaches are exemplified in All-N.B.A. first team awards: ten for Duncan (his 1st, 2nd, 3rd, 4th, 5th, 6th, 7th, 8th, 10th and 16th seasons) and two for McGrady (his 5th and 6th seasons). Position scarcity played a role but the time period over which Duncan has excelled is a testament to his work ethic. Steve Nash, who has said that if every player worked as hard as he did, he’d be out of a job, made three All-N.B.A. first teams, when he was thirty, thirty-one and thirty-two years old.

It has often been said that Iverson and McGrady never played with other great players during their primes, which is true to a degree. A player cannot control the decisions of the general manager but they can decide whether to make their teammates better. When he moved to the Miami Heat, Ray Allen brought his fitness regiment with him and convinced others to participate.

One of the reasons that Joe Dumars and others felt that the Detroit Pistons have been less than the sum of their parts was the leadership vacuum left when Chauncey Billups was traded. Players who had succeeded in the past became self-centered and a coach on the floor (Billups) was traded for a so-called coach killer (Iverson). Billups has been one of the most respected players in the league and a leader on Team N.B.A. and the Pistons have re-acquired him, hoping he can lead younger teammates like he did during his first stint.

Great teammates find multiple ways to put points on the board, even as their skills diminish. Michael Jordan limited his drives and used a step-back jumpshot as he aged, Kobe Bryant uses his pivoting as much as his athleticism, some players shoot from the outside more and others assist on more of their teammates baskets. Iverson had trouble adjusting and modelling the way: 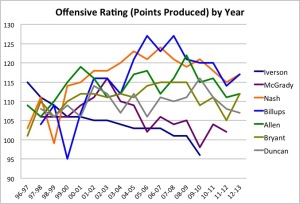 As he slows down, Duncan has developed a deep understanding of what constitutes his game and how he can be effective. What he wants to do (driving to the middle with his right hand and his bank shot from outside the key) compliments his attributes and those of the team. The simple game is very scaleable and suits the limited minutes that he receives during the regular season.

Nash, Allen and Duncan have lasted because they can work with others and listen to those who are offering feedback. Bryant has been a demanding teammate at times but he wants to win and asks others for help if he needs it, for example when he wanted to expand his game in the post and he worked with Hakeen Olajuwon.

By most measures, Allen Iverson and Tracy McGrady were phenomenal players. But as sport science advances, greatness will no longer be defined by spectacular success during a short period of time but also sustaining that success for a period of many years. Iverson and McGrady entered the N.B.A. with talent and athleticism but the fact that their careers burned out more quickly than some of their peers (and especially players who have followed who were more disciplined) means that fans who look back on their careers they won’t ask “weren’t they two of the best of all time?” but rather “what if?”