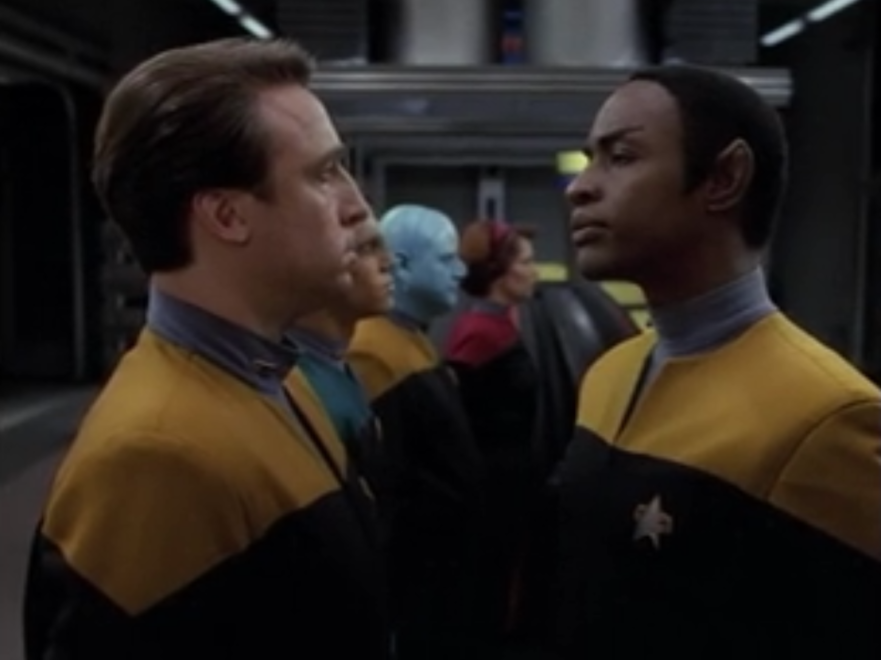 Star Trek remains extremely popular because of how the stories are analogous to many modern situations. It is a science fiction genre that does not overwhelm the viewer with technology; the characters – and humanity – remain the focal point.

During a syndicated episode of Voyager entitled “Learning Curve”, Lieutenant Tuvok encountered Maquis crew members who were unwilling to follow Starfleet routines. The renegades were incorporated into Voyager’s crew after both were stranded in the Delta Quadrant although the partnership was not working entirely smoothly. Starfleet demanded strict adherence to procedures which was a stark contrast to the Maquis philosophy of independence and operating with minimal oversight.

Captain Janeway, Commander Chakotay and Tuvok agreed that it was unreasonable to expect the Maquis to follow every Starfleet rule since they had not done so on their previous ship, which conducted guerrilla strikes against Federation targets, and had not attended the academy. The first solution, an improvised boot camp led by Tuvok in the shuttle bay meets with failure. The renegades did not respect Tuvok so they did not accept his authority. Physical punishment as a consequence for disrespectful behaviour increased the tension, since the Maquis did not consider the behaviour to be disrespectful.

Both sides must bend a little as the boot camp progresses. Chakotay – the former rebel captain – tells the crew members to make a choice between Starfleet and the Maquis. After he reminds Crewman Dalby that the “Maquis Way” occasionally includes violence and a degree of chaos, they reluctantly decide to adapt to Tuvok’s requirements.

A series of boot camp exercises meet with mixed results. After some spectacular failures, the crew members begin to feel that they are not Starfleet material. In their eyes, they haven’t done anything wrong but they have not successfully completed any of Tuvok’s tasks.

Meanwhile, Tuvok learns that he must be more flexible. His rigid Vulcan logic demands that the Maquis should be disciplined for insubordination but this is not possible on a vessel undertaking a seventy-five year journey back to Earth that requires the contributions of every person aboard. Neelix tells the Security Officer that he should get to know his students and what motivates them so he can create more meaningful incentives in class.

At this point, the secondary plot device – bacteria that Neelix covertly brought onboard to make cheese has infected the gel packs that power the ship – interferes, causing an explosion in the cargo bay during a training session. A crew member is injured and Tuvok orders everyone to leave for their own safety. He disobeys his own order and attempts an ill-fated rescue himself, only to be overcome by toxic plasma gas. Only by working together can the remaining Maquis save Tuvok and their comrade.

In the end, everyone is safe and they all learn something. Tuvok learns that as an instructor he cannot be aloof and unyielding, that he must consider the students whom he is instructing. The crew members see how Tuvok changed the rules slightly due to the emergency situation. Inspired by his example, the crew members realize that Starfleet protocols are a necessary tool to maintain order or a complex ship and it is best to follow them, only deviating when there is an absolute need.