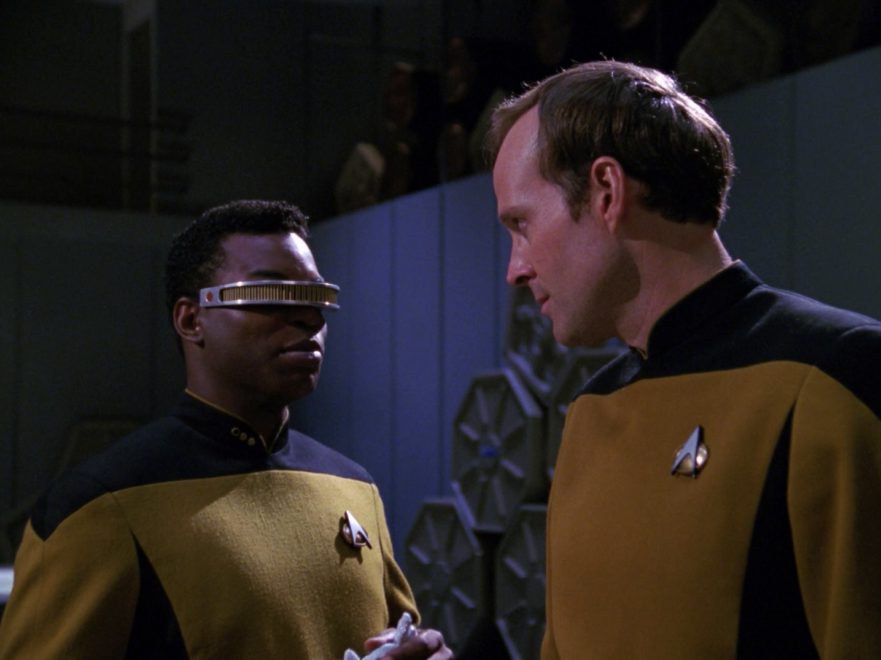 College coaches may send envelopes full of money via Emery Worldwide, professional coaches may be found guilty of sexual harassment forcing their organization to pay $11.5 million in damages, and international coaches may enter a non-disabled team in the Special Olympics but one person can always be relied upon for his leadership is Captain Jean-Luc Picard of the U.S.S. Enterprise. During a recently rerun episode of The Next Generation, Chief Engineer La Forge and Commander Riker submitted and unsatisfactory performance review for Lieutenant Barclay to Picard.

The captain ordered the pair to reconsider their evaluation of the socially awkward lieutenant. It was not a matter that Picard was unwilling to fail one of his crewmembers; he stated clearly that he was wholly unaccustomed to anyone on his ship receiving a failing grade. He wanted to maintain the Enterprise’s high standards while ensuring that the assessment was based on actual performance, not personal factors.

Picard ordered Riker and LaForge to get to know Barclay better and provide him with opportunities to succeed. Once Barclay was given a chance, he proved able to focus on his job and perform under pressure. Some random organism or computer virus was destroying the ship system by system and Barclay was the one with the expertise to devise a solution (while working as part of a team in Engineering).

Captain Picard was disappointed that Acting Ensign Crusher and other crew members were calling Barclay a pet name and insisted that decorum be followed. It was later revealed that Barclay had created a Holodeck version of the captain that was wholly unflattering but Picard remained focused on the mission.

Picard knew that the ship needed Barclay and it was his job as a leader to inspire all crewmembers to contribute. Counselor Troi was involved in the problem-solving process because although she did not possess technical expertise, she had the social skills to help Barclay improve his self-image. When Barclay appeared on episodes of Voyager, he had been promoted several times, developed great self-confidence, and was integral in helping that ship return to the Alpha Quadrant.